You’re driving your car, when suddenly you notice movement out of the side of your ear, and then you hear the buzzing. A bee has gotten into your car!

For most people that would be bad enough. But what if it was thousands upon thousands of bees?

This nightmare scenario befell a New Mexico man when he returned his vehicle after a brief shopping trip. Inside, he found a gigantic swarm of 15,000 bees.

How the bees got into the car is a mystery. But what’s even more mysterious is how the man didn’t notice them until he started driving.

The man had made a short, 10-minute at an Albertson’s in Las Cruces, New Mexico. In the hot weather, he left the window of his Buick open as he headed to the store.

Once he had what he needed, the man came back to his car. He loaded his groceries into the trunk, got into the driver’s seat, and started to drive off.

Then, in what will probably be one of the biggest WTF moments in his life, he noticed them. A swarm of thousands of bees in his backseat. 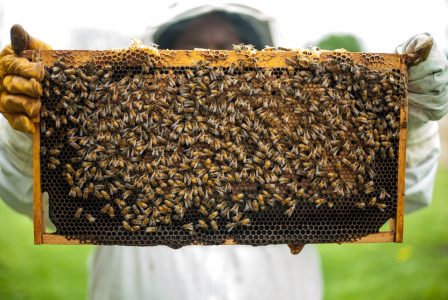 The Right Man for the Job

The man quickly got out of the Buick, as any reasonable person would do. He was then left with a dilemma – what in the world was he going to do about the bees.

“He called 911 because he didn’t know what to do,” said Jesse Johnson, a firefighter and paramedic with the Las Cruces Fire Department (LCFD).

Johnson – whose hobby is beekeeping – said he had just finished a family barbeque when he got a call from the LCFD. Aware of his hobby, the department asked if the off-duty firefighter could go and take a look at the car.

Concerned for the wellbeing of the insects, Johnson was ready for action.

“I’ll do anything to keep people from killing the bees,” the enthusiastic beekeeper said.

He quickly packed up his bee gear and headed over. After assessing the situation, Johnson knew just what to do.

He donned a beekeeper’s helmet and a protective jacket. Then, he pulled out an empty hive box that he had pre-treated with lemongrass oil.

“It really mimics the scent of the queen,” he explained.

Johnson approached the vehicle with the box, and spent the next half hour loading the bees into it. He said that he could’ve probably done it in 10 minutes, but he wanted to make sure he wouldn’t harm the insects.

Finally, all the 15,000 bees were safely stored in the box. Johnson then relocated them to his property to keep company to his existing four hives.

Not a Firefighter’s Day Job

Despite the ridiculous number of bees, the LCFD reported no major injuries. However, a security guard and one other firefighter ended up feeling the bees wrath.

“One guy got stung on the lip, and we made fun of him the next morning,” Johnson chuckled.

According to Johnson, the situation wasn’t particularly dangerous, despite its looks.

“Luckily, when bees are swarming, they’re pretty docile. They don’t have a home to protect for a moment. It’s much more intimidating than it is dangerous,” he said.

The car’s driver nonetheless observed the operation from a safe distance. Granted, he was probably more concerned about the car than his safety.

“He didn’t want to have anything to do with it. He was worried because the car was borrowed from a friend,” Johnson said.

Johnson explained that it’s common for bee colonies to split, with one swarm following the queen and the other left to its own devices. Johnson speculated that the swarm found in the Buick – which weighed three and a half pounds – came from a parapet, gutter, or one of the nearby homes.

They probably thought that the car made for a nice shady and safe location to rest while they looked for a new home.

LCFD Chief Jason Smith said the Fire Department usually doesn’t remove bees from cars or properties. However, as this was a high-traffic locations and the bees weren’t aggressive, they thought they’d make an exception.

“We take a more patient or deliberate approach to try to let the bees do what they need to to find a new home,” Smith said.

As such, it made sense for them to call Johnson to the scene. And he gets to reap the benefits of the job – fresh honey, straight from his backyard.