Being a judge is far from an easy job. There are no clear measurements for doling out justice for the accused’s crimes, and things might be left to individual interpretation.

Recently, we got a perfect example of that. A U.S. judge decided to not jail a former neo-Nazi for threatening journalists and public figures.

Parker-Dipeppe – assigned female at birth under the name Taylor – is transgender and a former member of the white supremacist and neo-Nazi organization Atomwaffen Division. As a side note, the name is German for “Nuclear Weapons Division.”

Coughenor said that his ruling was based on Parker-Dipeppe’s abusive childhood. He felt that sending him to prison would add nothing, particularly as Parker-Dipeppe had voluntarily confessed and exhibited remorse for what he did.

The judge admitted that the decision whether or not to lock up Parker-Dipeppe was a difficult one. But, in the end, mercy won.

“None of us have suffered the difficult situation this defendant has endured as a result of his gender identity confusion. Enough’s enough,” Coughenor said during the virtual hearing. 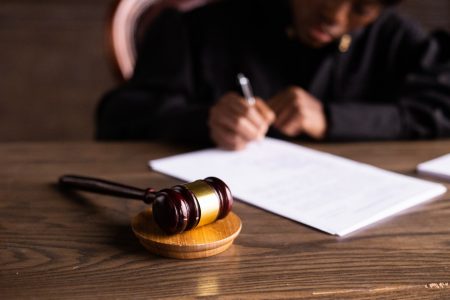 Parker-Dipeppe’s former comrades were not a nice bunch. Since its founding in 2016, more than a dozen members of Atomwaffen or its splinter group Feuerkrieg Division have charged with federal crimes.

Several members have even tried for killings and murder. The group has been linked to a 2017 shooting in Tampa, Florida, that killed two men, and the killing of a California student in 2018.

Parker-Dipeppe, however, wasn’t quite so deep in the neo-Nazi organization. Instead, according to the courts, he was small-fry who took part in an organized campaign to terrorize and harass journalists who had written unflattering stories about the group.

The prosecutors said that two men – Cameron Brandon Shea from Washington and Kaleb J. Cole from Texas – were the brains behind the harassment campaign. The two recruited members of Atomwaffen’s 10-man strong Florida cell to help them out.

One of those recruited was Parker-Dipeppe. If a transgender neo-Nazi seems strange to you, it was – he had concealed his gender identity from the group’s other members.

Parker-Dipeppe was the only member of the Florida group who had a car. Therefore, he ferried his fellow members around and helped them affix posters to houses where they assumed the journalists lived.

The posters featured swastika imagery and messages such as: “You’ve been visited by your local Nazis.” In addition to Florida, the group targeted journalists in Arizona and Washington.

What drove Parker-Dipeppe to the Nazis was a desperate search for companionship. His life up to joining the organization had been an endless mire of abuse and loneliness.

Parker-Dipeppe realized he was transgender at the age of 5 when he lived with his parents in New Jersey. While his mother supported him, his father wasn’t pleased.

He tossed out the “boy clothes” Parker-Dipeppe’s mother had bought him and started abusing him. This included choking him until he couldn’t draw breath.

Things weren’t any better in school. Parker-Dipeppe was a regular victim of bullying, which the school did practically nothing about.

In fact, the school ended up paying $50,000 to Parker-Dipeppe to settle a lawsuit he eventually raised against it. Yeah, we don’t want to know what he had to go through.

Parker-Dipeppe eventually moved to Florida with her mother. But if you thought that let him escape his personal hell, think again.

One day, his mother’s new husband came home drunk and began to beat him once more. He ended up knocking one of his front teeth in and repeatedly smashing his head against the sidewalk.

“This led him to just seek acceptance, and unfortunately he found it from these knuckleheads,” Parker-Dipeppe’s attorney Peter Mazzone said during the court hearing.

The prosecution acknowledged that Parker-Dipeppe had a horrifying childhood, and that it was even somewhat understandable that he’d throw his lot in with any group that was ready to take him in. But that shouldn’t have absolved him of his crimes, they argued.

“[Parker-Dipeppe] instilled terror in his victims and contributed to the wide sense of fear and unease that many groups in this country understandably feel,” wrote assistant federal attorney Thomas Wood.

However, the judge was more merciful than the prosecution. Coughenor took into account that Parker-Dipeppe had confessed what he’d done to his mother soon after he’d participated in the poster stunt.

He also told her that he was afraid the group would find out about his gender identity. His mother convinced Parker-Dipeppe to come clean – they’d most likely find out eventually anyway.

Unsurprisingly, the hateful organization kicked him out as soon as he was done telling them the truth. Mazzone said that he lives in fear of retaliation to this day.

While he was in custody, Parker-Dipeppe had also made great progress in therapy. He’d also gotten a steady job, and married a supportive woman, Mazzone added.

In light of all this, Coughenor sentenced Parker-Dipeppe to time served after he tearfully told the court he was ashamed of what he’d done.

For his part, Chris Ingalls, a Seattle journalist and one of Atomwaffen’s victims, said he was alright with the sentence.

“Even though the FBI says Parker-Dipeppe was a low level player in this plot, he was part of a terrifying crime that my family and other victims live with to this day,” said Ingalls.

“I’m satisfied with the justice system’s handling of this case and I take Parker-Dipeppe at his word that he is truly remorseful.”

Talk about a good sport.