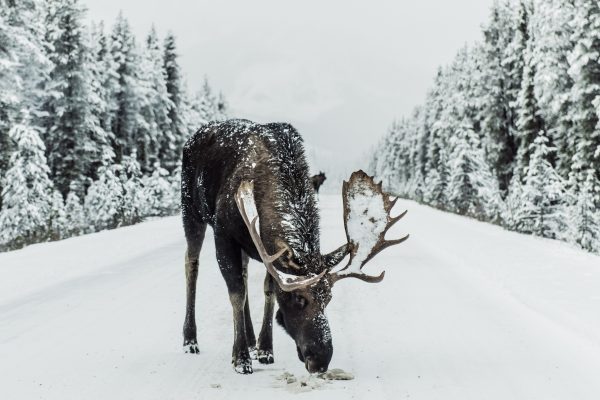 Sergeant Marie Quarterman was transferred from Texas to Alaska in 1991, she knew it was a possibility to see a moose, though didn’t expect such a close look. While driving on the Richardson Highway, about 25 miles southwest of Fairbanks, a moose stepped out in front of her car.

Her car was brand new, after only being bought ten days prior. “I tried to drive around her but couldn’t. After I hit her she flipped up and came through the windshield butt first. Her hind legs were inside the car,” said Sgt. Quarterman. ?I called Mom and said, ‘I saw my first moose. It was in my passenger seat.’ She said, ‘You mean you opened the door and let him in?’ I said ’No, I hit him and he flew into my front seat.”

Sgt. Quarterman scrambled out of the car, luckily, unharmed.

The moose had no broken bones but was cut on one side and in shock. While Sgt. Quarterman hitched a ride to Salcha to call the police, the distressed moose moved to the driver’s seat. By the time Sgt. Quarterman returned, the moose had moved till it was sitting in the front seat with its upper body out the windshield and its front legs were resting on the hood.

Trooper Burke Waldron, who came to help Sgt. Quarterman, tried over and over to free the moose; try as he might, his efforts were fruitless. They eventually had killed the moose. “She was scared to death. She’d been in the car for an hour and she’d given up,” said Trooper Waldron.

Since moose are so massive, standing up to six feet tall and weighing up to 1,600 pounds, it is actually far more common for the driver to get hurt. The fact that Sgt. Quarterman survived a head on collision without injuries is extremely lucky. In fact twenty-six out of 271 collisions end in human fatality. There is an average of about 120,000 moose born in Fairbanks alone, though only about 30,000 live to see the next year, according to Fairbanks, Alasak newspaper newsminer.com.

About 21 moose were hit that winter on that street alone! There is an average of 800 hundred killed a year, in Alaska. There are only about 200,000 moose in the Alaska area. If 800 are getting killed yearly… Well, the moose could be in trouble.