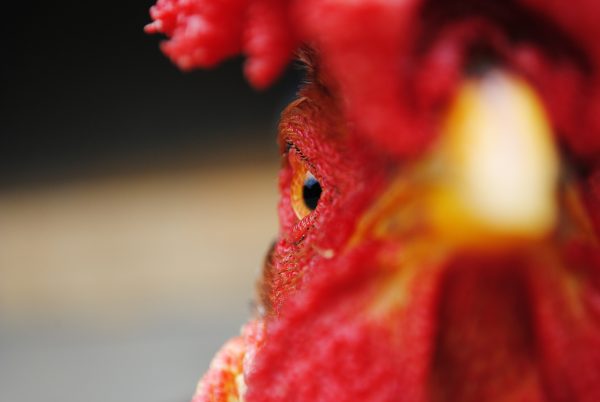 Ever heard the expression, “to run around like a chicken with its head cut off”? Well, this rooster took that to a whole new level…

The poor rooster, Miracle Mike, was living on a farm happily in 1945, until after five months when he was put on the chopping block.  Loyd Olsen lived on a farm in Fruita, California, with his wife, Clara Olsen.  Mr. Olsen was having a normal day until he went to get a chicken for dinner.

Mr. Olsen went to behead the animal when Mr. Olsen found out how “abnormal” the chicken was.  The chicken ran around as they normally do.  After a short run around, the chicken sat down as if nothing happened.  Mike tried to peck for food, though he didn’t get much.

After that Mr. Olsen left the chicken alone, expecting it to be dead by morning.  What did he find when he awoke?  Mike, sitting in the chicken house, sleeping peacefully.  Mr. Olsen decided to take care of the strange bird. He began feeding it water, milk and small pieces of corn.  Mr. Olsen would feed the chicken through an eye dropper.  Mike lived for 18 months, and in those months, he became the most traveled, popular chicken, ever.  People would pay a quarter to see him.  By the end of the month, Mr. Olsen had made 4,500 dollars.

For eighteen months, that chicken traveled the world, until Phoenix, Arizona.  Mike, randomly pecking the floor, found a kernel of corn on the carpet, one night after the show, and managed to pick it up.  Mr. and Mrs. Olsen heard choking in the living room then ran in there.  They saw the chicken on the ground, choking.  When they went to get the eye drop, they realized that they left in the building they had toured in.  The chicken died within a few minutes.

The Science Behind The Headless Chicken

You may ask why the chicken survived.  According to experts, chickens can survive because of their brain position.  The brain is positioned at a 45-degree angle at the back of the head.  The cerebellum, which is responsible for the major functions of the body, is in the chicken’s neck.  When the head is severed, the body can go on for a short time.  Most of the unlucky birds die moments after being decapitated.  Mr. Olsen’s hatchet missed the jugular vein, so the chicken only lost its sight.