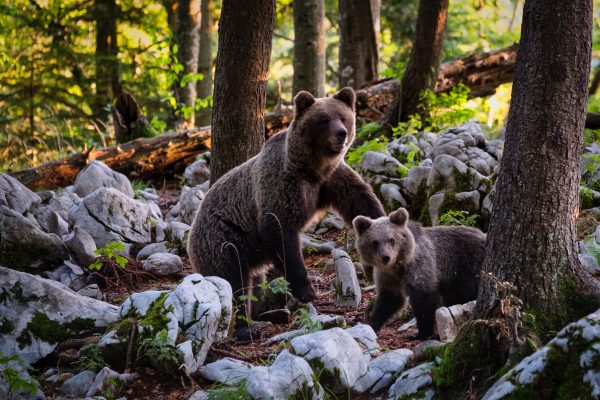 Have you ever wanted to get in a wrestling match with a bear? Well here are two stories to convince you otherwise.

Mr. Pumphery was cleaning up leaves last fall (November 7, to be exact) when he came across a mother bear escorting her two cubs. He says the cubs ran away when they saw him, but the mother stayed behind. He had no choice but to confront her.

“I had nowhere to run. I could not go right and I couldn’t go left. I guess I just went with my natural instinct and just tried to protect myself, ” he told ABC News.  Mr. Pumphery said that the bear ran toward him to attack. His first, and only, the reaction was to punch her face.

“I had nothing but my hands, so… I just started slugging at the bear as hard as I could,” Mr. Pumphery said. Pumphery said that he eventually got a couple of hits. Then the bear bit him and started shaking him like a rag doll.

Mrs. Pumphery said she heard the commotion from inside their house.

“I was scared to death that she was going to kill my husband. He was fighting for his life,” she told ABC News. She ran outside with her dog to try and scare the bear away.

“The door was open and… I saw the bear attacking him. I didn’t hesitate, I just went through the door and screamed, and then with the little dog barking, we tried to, you know, get [the bear] away from him. I guess with all the commotion, it startled her and she turned and ran,” she said.

When the bear was gone Mrs. Pumphery called 911 and the ambulance took Mr. Pumphery to the hospital, where he then received rabies shots. He said he was lucky to be alive and that now he wouldn’t leave the house without his shotgun. “I got lucky. I am one lucky individual to be alive today,” he said.

Andi Bauer and his girlfriend, Lara Booth, went on a five-day expedition last week. While walking they found themselves standing yards away from a bear, which had two cubs. The bear started attacking Mr. Bauer, by wrapping its jaw around his right leg and tossing him from side to side.

Ms. Booth, who was walking behind him, kept screaming “Punch it in the eye!” (She’s obviously smarter than the average bear.) Ms. Booth explained that she was “frozen in fear,” since this was the first time they’d saw a bear. When the bear attacked a second time, Mr. Bauer did just that. After he hit it the bear fled. They immediately called 911. Mr. Bauer’s leg was badly broken and he was missing a chunk out of his calf.

“I was [sic] a state of shock, so I don’t remember the pain anymore. ”

But this momma bear was suddenly a meter (Mr. Bauer is from Germany, which is why he said it like this) away from me.  It was so loud. I had my side turned away from it, so when I saw it bounding towards me I just didn’t have time to think about what to do.”

“It bit my leg, held on to it and dragged me and threw me about. I was crying out for help, but there wasn’t anything that anyone could do. The bear let go of me, and after Lara told me to punch it in the face, I hit it. It then went away. I suppose I’m lucky I got through it. But I’d have been luckier not being attacked.”