Even after all these centuries, we still don’t know what’s behind Mona Lisa’s mysterious smile. But we wouldn’t be surprised if her smile had gotten a bit wider after the latest bizarre attack against the famous painting.

That’s because the man carrying out the assault threw a cake at it. He was also dressed as an old woman.

And he hopped up from a wheelchair to do it, only to yell “think of the Earth” afterward.

Yeah, we’re not really sure where to begin with this case either. 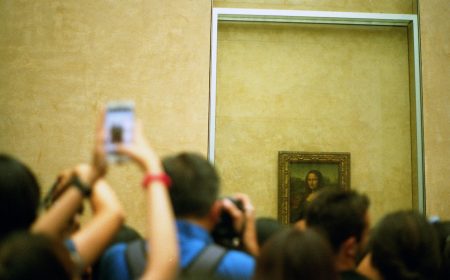 The strange incident took place at the Louvre, Paris, where Mona Lisa hangs on display. On May 29, a crowd of people had gathered to view the painting, as usual.

And that’s where the usual proceedings of the day ended. American tourist Luke Sundberg described the “jaw-dropping” events that followed in an interview with the BBC.

According to Sundberg, there were suddenly loud gasps from the museum visitors. A person whom everyone had assumed to be a wheelchair-bound old woman suddenly leaped up to her feet.

But as everyone soon realized, this wasn’t an old lady at all. Instead, Sundberg described the person as a man wearing a wig and lipstick. 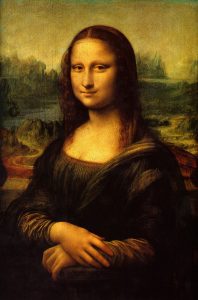 The cross-dressing man then began punching the bulletproof glass covering Mona Lisa in an apparent attempt to break it. Finding that his strength wasn’t enough to shatter the case, he then smeared a cake he’d apparently been holding all over the glass.

It took some 10-15 seconds for security personnel to make their way through the crowd. As the attacker spotted them, he then started to toss roses at the guards.

But the flowers were unsuccessful at deterring the security staff. They apprehended the man and escorted him away.

As the man walked past the crowd, he told them in French to “think about the Earth.”

“There are people who are destroying the Earth. Think about it. All artists, think about the Earth,” he said.

“This is why I did this. Think about the planet.”

The Paris prosecutor’s office later confirmed that a 36-year-old man had been arrested following the incident. The man had been taken to a police psychiatric unit, while authorities opened an investigation that could result in him being charged with damaging cultural artifacts.

The Hunt for Mona Lisa

Although this is by far the most bizarre attempt at damaging Mona Lisa, it’s not the first one in any case. Every since the painting achieved public attention in the late 19th century, there have been multiple cases of people trying to damage or steal it.

In fact, while the painting was still fairly obscure, it was successfully stolen. On August 21, 1911, Mona Lisa disappeared from the Louvre.

During the investigation, even Pablo Picasso was suspected of being the culprit. But the real thief was Vincenzo Peruggia, a Louvre employee.

An Italian nationalist, Peruggia believed the painting should’ve been returned to Italy. He swiped Mona Lisa from Louvre and hid it in his apartment for two years.

Eventually, authorities caught him when Peruggia tried to sell the painting to get rid of it. In 1914, Mona Lisa returned to Louvre.

A History of Vandalism

The next incident happened in the early 1950s when a man attacked Mona Lisa with a razor blade. He claimed to be in love with the painting and was trying to steal it — or make sure no one else could have it.

In 1956, another vandal managed to throw acid at Mona Lisa, damaging its lower edge while the painting was on display at another museum. After this event, Louvre put a glass case around the painting, but it wasn’t yet the modern bulletproof case, as we found out later the same year.

That’s when a Bolivian man called Ugo Unhaza Villegas hurled a stone at the painting while visiting Louvre. The stone broke the glass case and caused slight chipping damage to the canvas.

Then, in 1974, Mona Lisa made a trip to Japan to visit the Tokyo National Museum. While on display, a woman sprayed paint on the painting to protest the museum’s lack of access for disabled people.

Before the cake incident, the latest attack on Mona Lisa took place in 2009. That’s when an upset Russian woman, who had just been denied French citizenship, threw a souvenir teacup from Louvre at the painting. Once again, the glass case prevented damage to the painting.

You have to wonder, what is it about the smiling Renaissance lady that attracts weirdoes?