He started with 30 days in jail, after confessing to the judge that he burned 1 million Canadian dollars in cash, so that he didn’t have to pay child or spousal support due to a divorce settlement

He claims that he has the receipts to prove the amount of money that he took out of the account. He does not have proof of the bonfires though, or any witnesses. 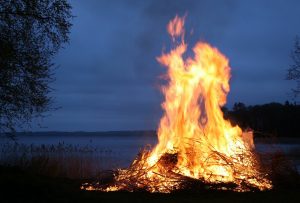 “Can I back you up a bit? When you say you destroyed it, what do you mean?” Superior Court Justice Kevin Phillips asked, to which McConville replied: “I burnt it.”

“It’s not something that I would normally do,” McConville said, according to Ottawa Citizen. “I am not a person that is extremely materialistic. A little goes a long way. I have always been frugal. That’s why my business lasted for 31 years.”

“I don’t believe you. I don’t trust you. I don’t think you’re honest,” the judge told him. “I find what you have done to be morally reprehensible because what you claim to have done willfully and directly undermines the interests of your children.”

Some of the money earned was from a sale of properties and businesses to his accountant, which is a direct violation of the court order to not sell his assets.

McConville also refuses to file an affidavit to the court disclosing his finances.