Gritty was accused of punching a 13-year-old boy in the back at a season ticket holder event but has since been cleared of the charge. As of Monday, detectives said they have completed their investigation of the November 19th incident.

“That investigation, which has been completed and is no longer active, determined that the actions of the individual portraying the Flyers’ mascot did not constitute physical assault as alleged,” police said in a statement.

Chris Greenwell claimed that Gritty punched his 13-year-old son and the investigation was launched on December 21st. The incident was said to have taken place during a holiday photo shoot for season ticket holders. 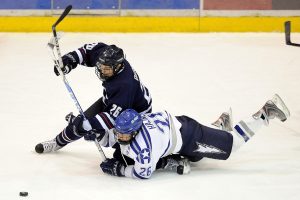 The Flyers hosted an event where fans could meet the eccentric mascot, who has become more and more popular since being introduced in 2018. But then this happened, or allegedly happened.

Greenwell claims that after his son patted Gritty on the head, that he got up from his chair, ran at his son, and then “punched my son as hard as he could.” “Gritty gets up out of his chair, makes a lunging motion, and punches my son in the lower right side of his back,” Greenwell was quoted as saying.

His son was later diagnosed with a back bruise according to the father.

Officials from the Comcast Spectacor, the company who owns the Flyers, says there was not footage of the incident because “cameras in that area of the center are focused on other locations.”

He later brought the incident to the attention of the police and this was when an investigation was opened.

Because they Comcast Spectacor officials told Greenwell there was no evidence that Gritty struck the boy, they have attempted to ‘fix” the problem instead with Flyers players autographs and a chance to sit on the bench during the team’s warmup before a game.

The Flyers did previously state that, “We took Mr. Greenwell’s allegations seriously and conducted a thorough investigation that found nothing to support this claim.”