This shark is called a “living fossil” because of evidence of its existence dates back to at least 80 million years so. When this shark was found alive and thriving off the coast of Portugal, more clues were being uncovered about the resilience of this ancient sea creature.

The shark was discovered off the Algarve coast by researchers working on a European Union project. The project’s goal was to “minimize unwanted catches in commercial fishing,” but the team ended up unearthing the rarest and most ancient animals on the planet.

Scientists say that the frilled shark has stayed the same, inside and out, since the Cretaceous Period, when the Tyrannosaurs Rex and Triceratops still roamed the planet.

The animal known as Chlamydoselachus anguineus is an unevolved and simple animal due to the lack of nutrients found in the deep-sea where it spends its time. A Japanese study found that the shark’s diet is 61% cephalopods, the same class as squids and octopus’.

The creature is usually found between 390 and 4,000 feet below the surface, which is why it’s rarely seen and wasn’t even discovered before the 19th century, though it’s been around long before we were.

The shark found this summer measured around 5 feet in length but at their longest can grow to around six and a half feet. Another study showed that these frilled sharks may have the longest gestation period of any living creature, at 42 months. 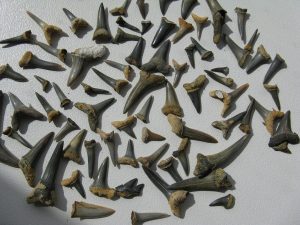 The frilled shark is named after its gills. Most other sharks have separated gills but this frilled sharks gills stretch all the way across its throat. These sharks ave six pairs of gills with “frilly” edges.

This shark also as 300 teeth in 25 rows that are specifically designed to help it  “to trap squid, fish and other sharks in sudden lunges.” Their mouth is very frightening looking with all those teeth and spines called dermal denticles.

You will probably never see one of the sharks, up close and personal. Stay away though, and avoid this shark’s mouth and teeth!