The thing is, these sky-high towers are topped with enormous turbine blades, and the blades need to be replaced every now and then. Because of this, a lot of old equipment gets disposed of, and in more recent years, experts have debated whether this disposal of materials meets environmentally friendly criteria.

The main concern is whether or not the wind turbine blades are recyclable. If not, the system’s presumed sustainability is negated if the retired blades are being dumped into a landfill.

The situation is made tougher when you consider that the blades are made out of fiberglass, which is hard to cut through, transport and repurpose into other things.

There has been some success with recycling the blades, such as to create 3D- 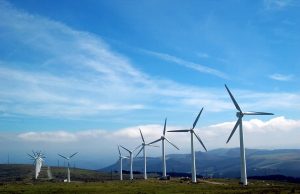 printing feedstock. Most of the time these artifacts are just added to piles of trash, which emanate harmful gasses into the atmosphere and encroaches on wildlife habitats.

And for the same reason as the rest of the garbage that resides in the landfill, it’s the cheapest.

Scientists have offered innovative blueprints to address the issue. A new form of wind turbine was developed combining glass fivers with plant-based derived, and synthetic polymers, which refer to long chains of molecules.

The mixture is called a composite resin, and the hype is this. It can be recycled a lot more easily than pure fiberglass can. And this is where the gummy bears come in..because it can be recycled into that as well.

“The beauty of our resin system is that at the end of its use cycle, we can dissolve it, and that releases it from whatever matrix it’s in so that it can be used over and over again in an infinite loop,” John Dorgan, a chemical engineer from MSU, about to present the team’s work at the fall meeting of the American Chemical Society, said in a press release. “That’s the goal of the circular economy.”

For Making Gummy Bears from Wind Turbine Blades: Part Two, click the title. And enjoy the rest of the story!