The death of your favorite celebrity can hit you surprisingly hard. Although you’ve never actually known them, it can feel like you’ve lost a family member.

But what if the celebrity is a 1,300-pound walrus? Does that change anything?

Not really, at least if you look at Norway. The Norwegian Directorate of Fisheries recently euthanized Freya, a walrus that had become famous in the Scandinavian country this summer.

Freya had become a regular guest in Oslofjord, a fjord that — surprise, surprise — lies by the Norwegian capital of Oslo. People really seemed to like her and large crowds gathered to watch the massive mammal whenever she showed up.

Unfortunately, that also put people in danger, the Fisheries Directorate argued. They’re not completely wrong — Freya sunk numerous small boats when she clambered on them to sunbathe.

Although she hadn’t hurt anyone (yet), the authorities didn’t want to take the chances. On August 14, Freya met her end.

But the decision has been divisive in Norway, to say the least. Some agree with the Fisheries Directorate, while others claim that the animal was straight-up murdered. 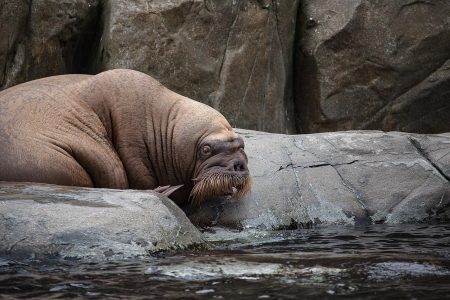 She Came from the North

But who is Freya and where did she come from? According to guesses from experts, it’s possible that she originally lived on Svalbard.

This Norwegian-owned archipelago sits in the Arctic Ocean, roughly halfway between Norway’s northern coastline and the North Pole. It’s possible that melting ice sheets drove the walrus on a voyage south.

Freya was potentially first spotted by humans in 2019. But the first confirmed sighting came in October 2021, when people noticed the walrus napping on the deck of a Dutch Walrus-class submarine.

How appropriate. That also made her the first walrus to visit the Netherlands in 23 years.

By December 2021, Freya — now named after the Norse goddess of love — had migrated to the Shetland Islands off the coast of Scotland. She cruised by the English, Danish, and German coasts until finally arriving in Oslofjord in spring 2022.

Although Norway is a northern country, walruses are rare visitors around Oslo. As such, Freya quickly became a popular sight in Oslo’s harbor.

People flocked to the harbor to watch, film, and photograph Freya, whatever she was doing. For the most part, her activities included sleeping and sunbathing, although occasionally she feasted on fish or treats from her fans.

However, her presence in the harbor wasn’t without its issues. Walruses like to climb on ice floes to sleep but there weren’t any in Oslo.

There were plenty of boats, though. And not all of them were built sturdy enough to withstand a one-ton walrus.

Tuva Schøyen Grue, a resident of Stabbestad some 80 miles south of Oslo, lost her boat to Freya’s blubbery beauty.

“We have been in contact with the insurance company, and they probably do not cover walrus damage,” she told NBC News.

Additionally, people started getting dangerously close to Freya. Although she might’ve seemed docile and slow on land, she was still a humongous and unpredictable animal.

Authorities warned people to give her a wide berth but — of course — they didn’t listen. People would regularly swim with her in the water, throw things and snacks at her, and get right up to her to take photos.

“The public has disregarded the current recommendation to keep a clear distance to the walrus,” Nadia Jdaini, a spokeswoman for the Fisheries Directorate, told CNN.

A Change in Stance

Faced with the uncooperative public and mounting damages, the authorities were left with a difficult decision over what to do with Freya. But killing her was initially off the table.

As late as late July, the Fisheries Directorate said that “euthanasia was out of the question” as a solution to Freya’s antics. Instead, the Directorate first considered simply moving Freya elsewhere.

Unfortunately, the cost of such an operation would’ve been much too high. Meanwhile, people kept pestering Freya to the point that she was likely stressed and sleep-deprived, Jdaini told Sky News.

You’ve seen how cranky people can get when they don’t get enough rest. Now imagine that but amplified to the scale of a walrus.

Unfortunately, anesthetizing or moving Freya wasn’t an option since the massive animal could’ve drowned or choked under its own weight. In the end, the Fisheries Directorate saw a quick death as the most merciful solution.

“The decision to euthanize the walrus was made based on an overall assessment of the continued threat to human safety,” said Director General of Fisheries, Frank Bakke-Jensen, in a statement.

He added that the Directorate considered all possible alternatives, but it couldn’t ensure Freya’s safety and welfare with the options it had.

“We have sympathies for the fact that the decision can cause reactions with the public, but I am firm that this was the right call. We have great regard for animal welfare, but human life and safety must take precedence,” Bakke-Jensen said.

Murdered — But by Whom?

And there were reactions from the public. Many were against it.

“I was shocked and very disappointed,” Siri Martinsen, a veterinarian and director of the animal welfare group Noah, told NRK. She doesn’t think there were grounds for killing Freya.

Rune Aae, a biologist from the University of Southeastern Norway, called the killing “too hasty.” Fredrik Myhre from the Norwegian branch of the WWF also believed the authorities should’ve been more patient and that Freya would’ve left Oslofjord eventually on her own.

Some, like Dr. Jeff W. Higdon, a Canadian biologist, agreed that Freya was murdered — but not by the Fisheries Directorate. Instead, he put the blame squarely on the people who kept pestering the walrus.

“Human behavior significantly increased risk in this case. Everyone who crowded that animal put themselves and their children at risk and contributed to the unfortunate outcome,” Higdon told BBC.