From human composting to chewing gum coffins, we’ve brought you many stories about strange and unusual funeral practices. But now the state of Maine is looking to put everyone else to shame when it comes to burials.

A new bill submitted to the Maine state Legislature’s Health and Human Services Committee would legalize open-air funeral pyres. In other words, this is the closest you could get to an actual Viking funeral.

The picture of the legendary Viking funerary practice has become synonymous with literally going out in a blaze of glory. There’s just something about having your earthly remains disposed of by setting them off in a burning boat that’s so cool.

The funeral pyre keeps popping up in popular media as well. If you’ve watched The Game of Thrones, Vikings, or even The Phantom Menace, you’ve seen great warriors and chieftains depart the living world with a fiery send-off.

Funeral pyres are still commonly used – especially for high-ranking individuals – in the Far East, for example.

Should the bill pass, non-profit corporations in Maine would be allowed to conduct open-air cremations if they meet certain caveats. To begin with, the cremation needs to be conducted on a property at least 20 acres in size that the corporation owns.

Additionally, only one funeral pyre would be allowed to be lit at a time. The ashes of the honored dead could be scattered either on the funeral property, or anywhere else where law allows. 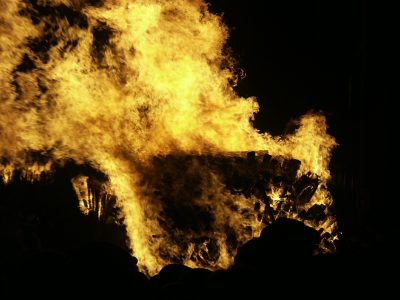 Open-air cremation is currently not legal in the U.S., apart from one town in Colorado. But as people are looking into alternative, environmentally-friendly funeral options, pyres keep attracting attention.

But wait, environmentally-friendly options? Wouldn’t setting up a massive blaze that burns hot enough to cremate a body be a huge environmental nightmare?

No, it wouldn’t. Dr. Ivan Vince has carried out a study in the UK on open-air funeral pyres and found them mostly harmless.

“Risks to the mourners themselves would be similar to those encountered by any persons tending a bonfire of similar size, and therefore I would expect them be considered acceptable,” Vince wrote.

“There will be negligible health risks to the public [1,500 feet] from the pyres,” he added.

Vince also found that pyre funerals held at woodland sites would have a zero carbon footprint. Additionally, when it comes to pollutants such as mercury, funeral pyres would actually be safer than normal crematoria, “if dental fillings are removed prior to funeral pyre cremation.”

Some Mainers are enthusiastically hoping that the bill passes. The Good Ground Great Beyond non-profit has been trying to get a permit to arrange open-air cremations at its 60-acre property.

“The intention for the land is to become a contemplative community sanctuary, scattering garden, and space for open-air cremation,” the organization says on its website.

“Open air cremation is a preferred final rite of many throughout the world and offers very direct and meaningful engagement with the transformations of our deceased loved ones,” they added.

Not everyone is as thrilled about the concept, though. When Missouri legislators tried to approve open-air cremation in 2019, Governor Michael Parson vetoed the decision.

“The burial of our loved ones or the disposal of their remains is deeply personal and should be treated with the utmost care and respect,” Parsons wrote in his veto letter.

“Without more thorough vetting to ensure that outdoor cremations can be conducted in a manner that fully disposes of the entire remains while also addressing the health and safety concerns of individuals who may be impacted nearby, I am not comfortable with allowing these types of ceremonies to be conducted.”

Not a Faithful Recreation… Luckily

Even if Maine OK’s funeral pyres, you still won’t get a boat to burn on. Then again, that is probably closer to what the actual Vikings did.

While they did burn their dead, that usually happened on a regular pyre, sans the boat. The ashes were often buried in an urn. How else would badgers have been able to raid a Viking cemetery?

Some funerals did feature a boat, but its wasn’t burned. Instead, chieftains and other individuals of note were sometimes buried with their boat.

There are also other, more questionable, Viking funeral practices we probably won’t see in Maine. And that’s probably for the best.

The 10th-century Arab scribe Ahmad ibn Fadlan wrote a record of the funeral practices of the Viking-descended Rus people, living near the Volga River in what is now Russia. Some of the things they did would not fly today.

According to ibn Fadlan, a poor man would be cremated in a small boat built specifically for the purpose. An important man, however, would get a gruesome funerary ritual.

The ceremony included asking the dead man’s slaves for a volunteer to die with their master. Ibn Fadlan notes that slave girls were more likely than not to offer to die.

We won’t go into the events of the funeral day in detail. But the volunteer sacrifice – at least at the funeral ibn Fadlan claimed to have seen – got drunk on excessive amounts of alcohol, had ritual sex with six men, and ultimately was simultaneously stabbed and strangled to death.

Yeah, we probably don’t need to see that happening in Maine.