We all know that cats have nine lives and this story just proves that once again. This lost cat knew what they were doing though, and hooked up with some hikers on the way.

The incident happened on Mt. Britsen in Switzerland. It was four days for the lost cat before hikers helped the feline to find its family.

Cyril and Erik Rohrer recently climbed over 10,000 feet to the summit of Mt. Britsen, with a cat in tow. But the thing is, it wasn’t even their cat.

The cat was lost even before meeting up with the Rohrer’s, but instead of trying to find its way back, the cat joined the Rohrer’s instead. The pair kept an eye on the cat until eventually handing it over to other hikers. 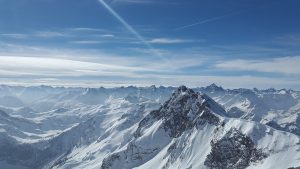 The hikers took the cat the rest of the way down the mountain, so that it could be reunited with its family.

Cyril of Sachseln, Switzerland said, “It was 4:30 a.m., at around 1200 meters, when we heard a cat in the dark forest. She made a really scared and confused confession. But we couldn’t get rid of her while walking uphill. So she stayed with us.”

“She started to shiver, and her paws began to bleed from the hard snow. Sometimes we picked her up and carried her when she was too exhausted to walk up the hill anymore,” the hiker added.  “We were definitely confused. I felt really sorry for the cat. She was really exhausted on the ridge underneath the summit.”

Cyril later found out that the cat had been missing for a full four days before joining their group. Apparently the cat had already made the trek with another set of hikers to the top of Mt. Britsen.

“Animals do weird things. And the are way tougher than humans. They’ll never give up. Even though they are hurting really really bad,” Cyril said of his new hiking buddy.