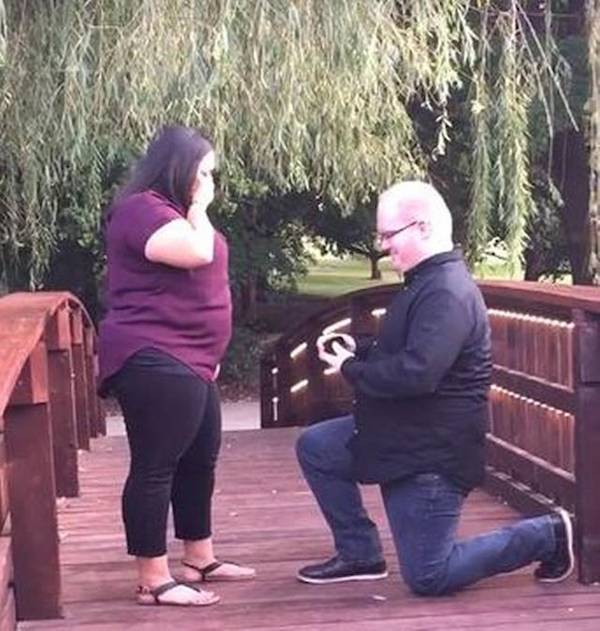 If there’s a lesson to be learned from this tragic tale, it’s to never propose over a body water, as romantic as it seems. Just take it from Seth Dixon. The Kansas City, Missouri man ended up swimming in an algae-filled pond in an attempt to find the $3,000 diamond ring he dropped during his proposal.

He was proposing to his girlfriend, Ruth Salas, in Loose Park when the diamond ring popped out of the tiny box he was holding and fell through the slats of a wooden bridge.

The couple watched in slow-motion horror as the ring “ping-ponged from one plank to another. You could hear a little ‘plop.’”

The unfortunate moment was caught on camera by the couple’s friend, Maddie Villareal. In her video, which is going viral, Dixon is seen confidently kneeling down on one knee before dropping to his hands in an attempt to save the ring. “Oh my gosh,” Dixon is heard saying with the look of shock on his face.

Parishioners at Seth and Ruth’s also decided to join in on the search after hearing their story. “We probably had 25 people there. I think we had like 12 people in the water all at once,” said wedding photographer Staci Dabney, who attends church with the couple. She snapped a photo of the ring search with several people in the swampy pond as the couple watched in despair.

The ring was never found, but Jimmy Kimmel came to the rescue—he surprised the couple on his show with a bigger ring and a chance for a proposal redo.