Feelings can get heated during difficult court cases. And it’s not always just the defendants or lawyers that lose their cool — that can happen to judges, too.

But you’d probably never expect a judge to pull out a gun during court. Yet that’s precisely what a West Virginia judge allegedly did.

Not only that, he allegedly left the gun sitting on his desk afterward — with its barrel pointed at the lawyers that had annoyed him.

The truthfulness of the story is still pending an official investigation. But we definitely will make sure to be extra respectful if we ever end up in front of a judge. 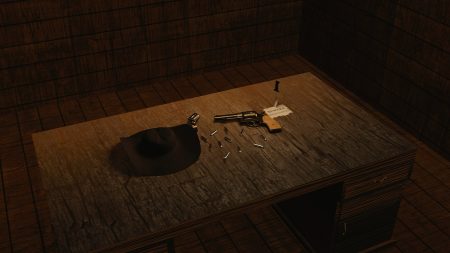 The alleged incident came after months of bad blood between Judge Hummel and corporate lawyers representing the natural gas company EQT. The company ended up in court accused of royalty non-payments, reported The Daily Beast.

EQT had been paying landowners in West Virginia royalties for pumping natural gas from beneath their properties. But nearly a decade ago, EQT stopped making the payments despite rising natural gas prices.

So, the locals sued in early 2021. That case has now been settled, but during the trial, there was a surprising revelation.

The EQT lawyers, led by Lauren Varnado, discovered that Judge Hummel’s parents had also received royalty payments from the company. As the money could eventually end up in Hummel’s hands, they sought to disqualify the judge from the trial.

According to court transcripts from April 2021, that didn’t sit right with Judge Hummel. The records show he went on lengthy explanations of his family tree and complained how his cousin “Christy” got upset with him when he didn’t recognize her at a wedding.

Varnado and her team asked higher West Virginia courts to disqualify Judge Hummel but to no avail. So, the contentious trial finally started in February 2022.

By that time, the locals of New Martinsville were reportedly so angry with EQT, that Varnardo’s team felt they needed security. As such, they hired a team of ex-CIA security contractors to escort them.

However, at a special hearing on March 12, the bailiffs suddenly barred the bodyguards from entering the courthouse. So, Varnado and the other lawyers went into the courtroom unescorted.

And that’s when things get weird.

According to further court transcripts, Judge Hummel began to ridicule Varnado for having bodyguards. He also reportedly said that if there were any security concerns, he would “take care of them.”

“We were never told these folks were security until most recently. I got this man here carrying a man purse, which I make fun of him every damn day for wearing such a sissy-ass contraption,” Judge Hummel said, according to transcripts seen by The Daily Beast.

At this point, Judge Hummel allegedly pulled out a Colt 45 handgun, also known as a 1911. Eyewitness reports claim that he waved it around the courtroom before placing it on the judge’s bench.

Whether it was intentional or not, Judge Hummel also allegedly left the gun’s barrel pointing at Varnado and her team. Witnesses state that the gun stayed there for the rest of the hearing.

‘There Is No Incident’

When asked about the incident by The Daily Beast, Judge Hummel initially denied ever pulling a gun out at the hearing.

“There is no incident … I’ve never shown a gun in my courtroom to anybody. I don’t want them to know that I have it,” he told the news outlet during the phone call.

However, after the interview, Judge Hummel reportedly called The Daily Beast again after only a few minutes. This time, he said he remembered having a gun, but it wasn’t a Colt 45.

“I wore the Colt Peacemaker. The Peacemaker never ever came out of the holster during that trial,” Judge Hummel said.

Finally, he called back for the third time. Now, he reportedly claimed that he hadn’t pulled out a gun — but a first aid kit.

“I did pull out a small, red first aid kit. But it was casual.

“I did show her a foiled packet, and said this is blood coagulant. We have preparations for active shooter situations,” Judge Hummel explained.

‘The Whole Trial Was Insane’

However, Varnado and other witnesses — including a sheriff’s deputy who was in the courtroom on the day — claim that Judge Hummel did brandish a pistol during the hearing. Varnado also says she has reported the incident to the FBI.

That said, she felt she couldn’t trust the local authorities because of “the judge’s position of power and influence,” reported The Daily Beast. As a result, she filed her report with the FBI’s Pittsburgh field office.

The FBI has declined to say whether it’s investigating the matter. However, the Judicial Investigation Commission of West Virginia is reportedly looking into the incident.

“It was too stunning to even process it … It was pretty traumatic for multiple people. The whole trial was insane,” Varnado said, describing her feelings about the alleged gun incident.

“It’s just a violation of basic gun safety, having it out like that pointing at people … I was on edge. I don’t know if it was loaded,” she added.