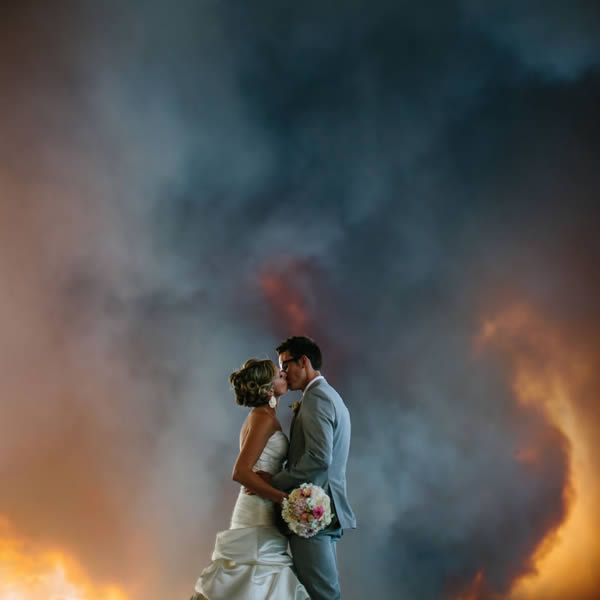 Photographer Josh Newton captured these dramatic wedding photos in 2014 in Oregon, after a small fire in the vicinity grew out of control. The fire brigade evacuated all the guests halfway through the ceremony.

No one was in any real danger — the fire was 6 miles away. Right before the bride walked down the aisle, firefighters came and told everyone they had to be evacuated. However, the wedding coordinator talked the firemen into letting them get married if they did it quickly.

After the ceremony, the couple took the most dramatic wedding photos ever, and the results were amazing.

Check the link for more photos.

2The tornado that served as the best photo backdrop ever 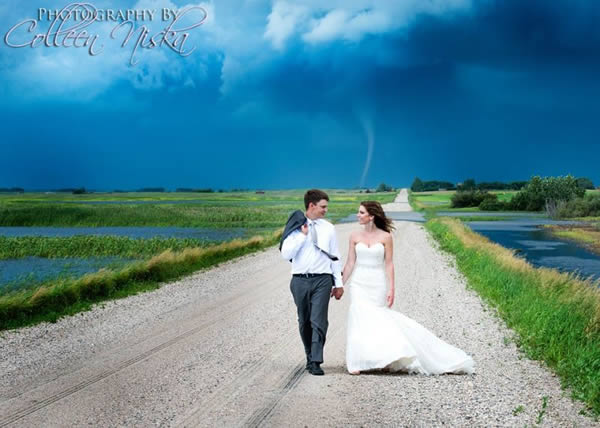 If a fire doesn't impress you, this next item on our list will.

A couple in Saskatchewan, Canada got more than they bargained for when a tornado touched down a couple of miles down the road from their wedding. The photographer took full advantage of nature's fury and shot some of the most incredible wedding photos ever taken.

Luckily for the couple, the tornado seen in the pictures was a safe distance away, and the thunderstorms did little more than blow over a tent at the reception.

The photographer, Colleen Niska,posted the pictures to her Facebook page with the caption "I've dreamed about a day like this!!!!!!!!!!!!!!! Could NOT wait to post these! Pretty sure this will only happen once in my lifetime!" 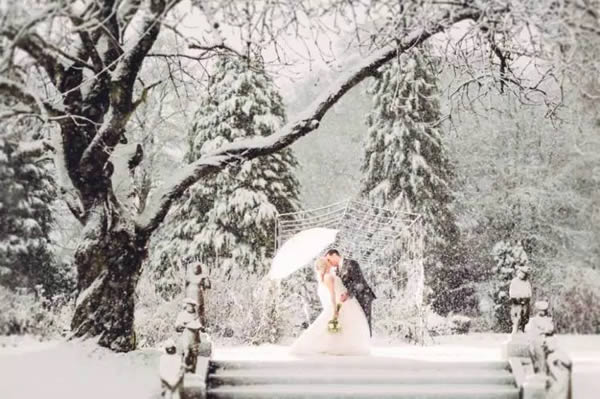 Carly and Chris Atwill were "thrilled" when their big day was hit by a freak blizzard. Eight inches of snow fell during the wedding ceremony at Lartington Hall in Barnard Castle, Teesdale, County Durham on their wedding day, creating a magical winter wonderland.

Wedding photographer Paul Liddement managed to capture some stunning snowy images of the newlyweds and their guests on the grounds of the venue.

4A rainy day gives a couple a magical wedding photo 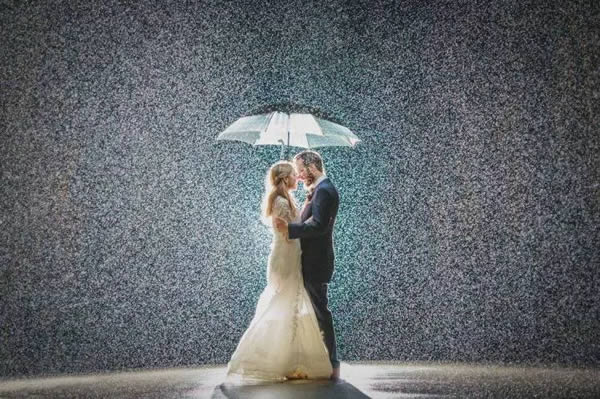 It's every bride's worst nightmare — an almighty downpour on your big day, but this magical wedding photo proves it needn't rain on your parade. Jessica Gower, 30, married Nick on September 2015 in the Southern Highlands of New South Wales, Australia. She woke up on the day of her wedding to an overcast sky. Fortunately, the sun came out for the ceremony, but the bad weather returned during the reception. Wanting to capture every memory from the day for the couple, wedding photographer Thomas Stewart asked if they'd pose for some shots in the rain. The result was mind blowing.

Daredevil photographer Jay Philbrick likes to add a terrifying edge to his photo shoots. He offers willing couples the chance for a portrait session they'll never forget. This bride and groom, Christie Sulkoski and Kevin Coleman, are standing on a ledge 350 feet above the ground in the White Mountains of New Hampshire.

Philbrick, who is a resident of the state, found his affinity for extreme photography after spending years working as a mountain guide and has set up shoots on ice cliffs, steep, snowy slopes and even underwater.

The photographer encouraged the newlyweds to put their lives in each other's hands and suspended them from a sheer cliff drop, although he insists his shoots are completely safe.

Philbrick works with his wife, Vicki, on shooting the images. They've photographed five couples on the White Mountains cliff face since beginning in 2008 and only once has a bride gotten cold feet.

6The hail storm that led to this awesome wedding photo 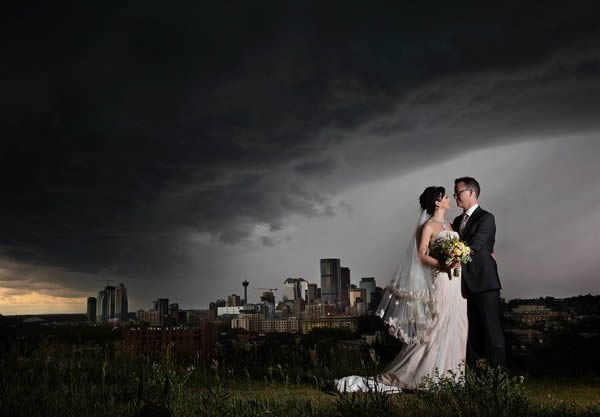 A massive, sudden hail storm struck Calgary on July 2015. It sent people fleeing for cover. Unfortunately, that was also the wedding day for Helen Knight and Owen Chan.

Before the storm hit, the wedding party assembled at Tom Campbell's Hill Natural Park to take photos with the Calgary skyline in the background. But as they set up and began to pose, dark clouds began rolling in. The result is this beautiful shot, taken just before the storm drenched the entire wedding party.

The wet wedding party rushed to the couple's house to dry off before dinner. “The boys tossed all of their suits into the dryer and the bridesmaids worked quickly to fix Helen's hair and blow dry her dress,” said photographer Cassie Molyneux.

7The newlyweds engulfed by giant wave while posing for photos 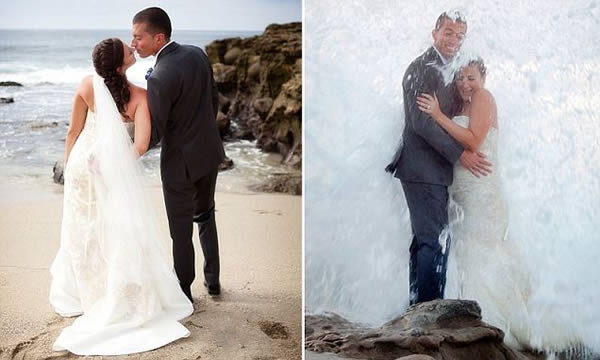 Moments after tying the knot on August 2014, Gina Pageot and Sergio Capozzi's love was put to the test when a giant wave crashed over them as they posed for a sunset snap by the ocean in La Jolla, California.

Wedding photographer Belinda Mayberry, who captured the moment, said she was impressed by the couple's stamina. 'They laughed and said 'screw it, let's keep going'," she said. "We were super excited and let them do their thing with the waves!"

8The couple who married on the rim of an active volcano 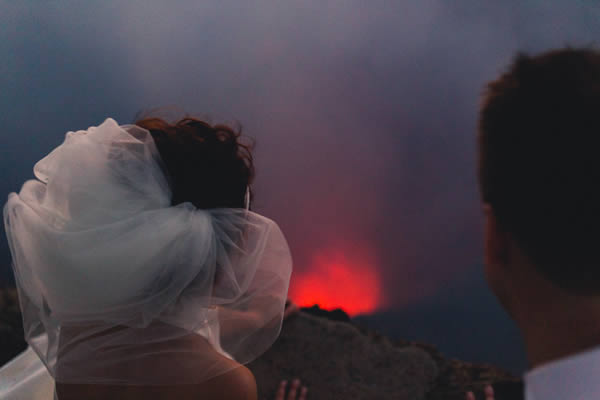 Sometimes wedding photos all start to look alike, but that's not an issue for Fox News Channel meteorologist Maria Molina and her storm-chaser husband, Reed Timmer. The two were married at the rim of an active volcano, the Masaya Volcano in Nicaragua.

You can see more pictures on photographer Mike Olbinski's page. 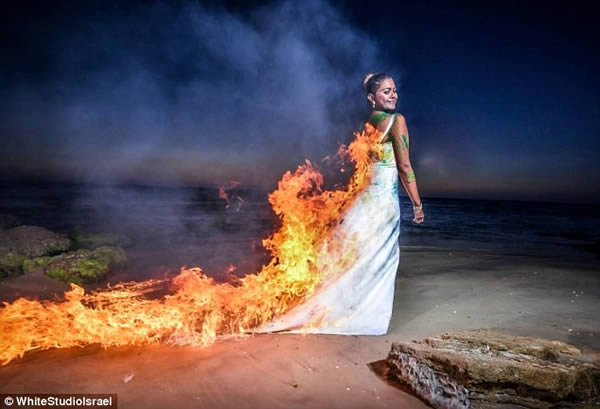 Tel Aviv area photographer Arik Siman-tov had been planning to shoot a photo so “extreme,” nobody would forget it. Then, he says, he was contacted by a bride, Natasha Samuel, who was looking “to do something that hadn't been done before.” It was a match — as they say — made in heaven.

Together they came up with the idea of lighting the bride's dress on fire, which she would then extinguish by running into the Mediterranean Sea. In the video below, Siman-tov is seen sparking the fire on the back of the dress and commands Samuel to quickly run into the sea to put it out.

The image is dramatic. Though it looks like her entire back is on fire, the flame never actually touched her back, according to Siman-tov. But it did get frighteningly close.