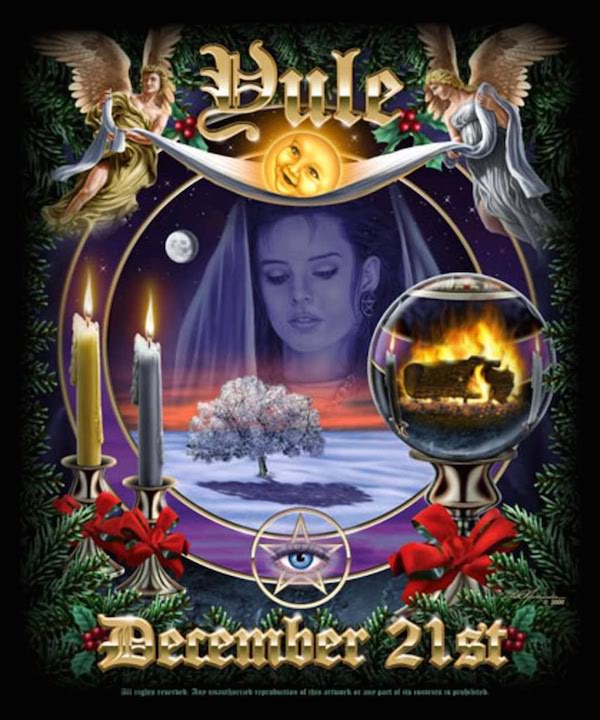 Yule marks the winter solstice in the Northern Hemisphere and celebrates the rebirth of the sun and beginning of winter. It is one of the oldest winter celebrations known.

The solstice is the longest night and shortest day of the year. The Earth's axis tilts the furthest away from the sun at 23-and-a-half degrees, giving all locations north of the equator less than 12 hours of daylight.

For Wiccans and Druids, Yule is one of the eight solar holidays celebrated each year. It is a time to spend with friends and family, exchange gifts and honor the sun. Homes are decorated with red, green and white decorations—colors that harken back to Druidic traditions. Rituals can include meditating in darkness with lit candles, singing pagan carols and lighting Yule logs (either in indoor fireplaces or outdoor bonfires).

Druids typically celebrate the holiday at Stonehenge in England. Similar celebrations take place at other ancient sites such as Newgrange in Ireland and the Cerro del Gentil pyramid in Peru. 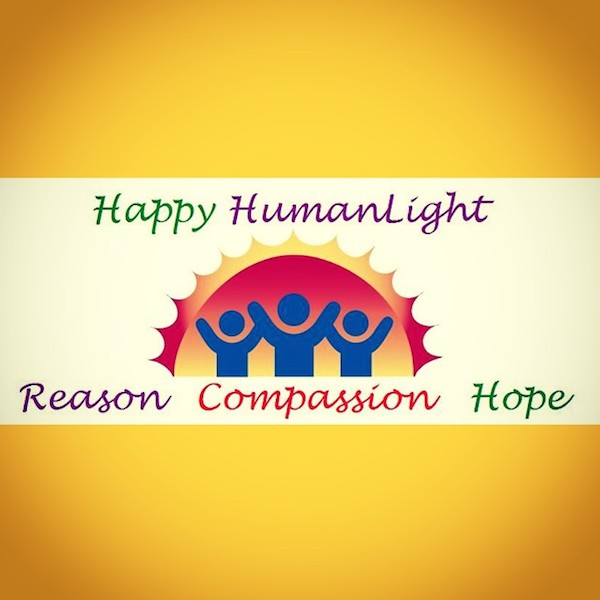 Interested in peace on Earth and goodwill toward men without the religious angle? HumanLight might just be for you.

HumanLight, a secular holiday celebrated on December 23, is designed to celebrate and express the positive values of reason, compassion, humanity and hope. The holiday was created and developed by leaders of the New Jersey Humanist Network, and was first celebrated publicly in December 2001 in Verona, New Jersey.

Anything goes a HumanLight celebration. There are no preset rules. There is no ceremony, ritual, “holy text” or secret handshake—just you and your positive outlook. But if you're interested in a little tradition, decorate your home in red, blue and yellow/gold—the HumanLight-related color scheme.

3The Church of the Flying Spaghetti Monster 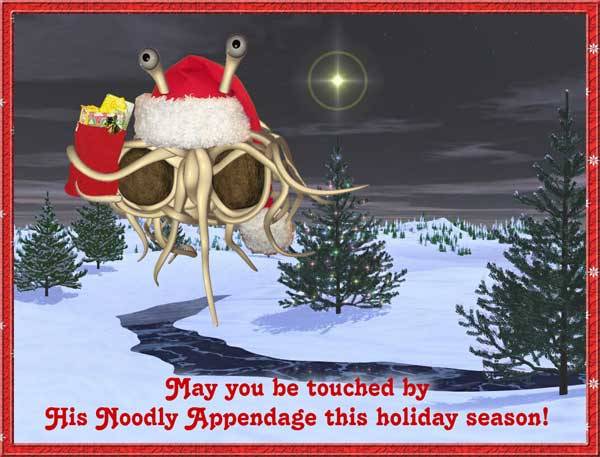 "Pastafarians" celebrate every Friday as a holy day, but around the time of Christmas, Hanukkah, and Kwanzaa, they celebrate a vaguely defined holiday named "Holiday." Because Pastafarians "reject dogma and formalism," there are no specific requirements for it—devotees celebrate Holiday in any manner they please.

Pastafarians interpret the increasing usage of "Happy Holidays" rather than more traditional greetings (such as "Merry Christmas") as support for their beliefs. In December 2005, George W. Bush's White House Christmas cards wished people a happy "holiday season," leading creator Bobby Henderson to write the president a note of thanks, including a "fish" emblem depicting the Flying Spaghetti Monster for his limousine or plane. Henderson also thanked Walmart for its use of the phrase. 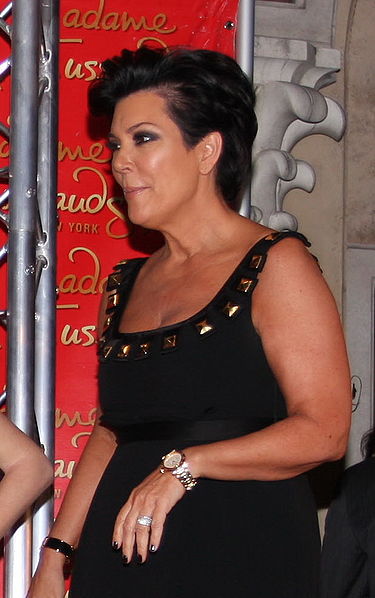 Not the Krismas you were looking for

The term "Krismas" is currently being co-opted by the media for Kris Jenner and the Kardashians, but that wasn't always the case. Krismas is a secular holiday that celebrates the myth of Kris Kringle (otherwise known as Santa Claus). It also occurs on December 25 of each year and is closely associated with Krismas Eve, which occurs December 24th.

The holiday is about giving gifts, especially those “from the heart”; it is about the magic of childhood; it is about peace on earth, goodwill towards humankind and anything else you wish it to mean.

Krismas was created in 2004 by Jacob Walker and Will Shetterly. One of the neat features of this celebration is that the 68% of humanity who are not Christian can wish another person "Merry Krismas" freely without bending their beliefs out of shape. 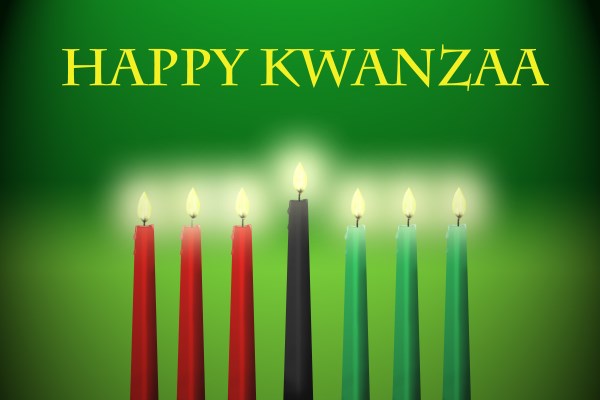 Kwanzaa was created in 1966 by Dr. Maulana Karenga, professor and chairman of Black Studies at California State University, Long Beach.

After the Watts riots in Los Angeles, Karenga searched for ways to bring African-Americans together. He started to research African “first fruit” (harvest) celebrations and combined aspects of each to form the basis of Kwanzaa.

The name Kwanzaa is derived from the phrase “matunda ya kwanza” which means “first fruits” in Swahili. Families celebrate in their own way with songs, dances, African drums, storytelling, poetry reading, and a large traditional meal.

Kwanza takes place over seven nights. When the celebrating family gathers and a child lights one of the candles on the Kinara (candleholder), then one of the seven principles is discussed. The principles, called the Nguzo Saba (seven principles in Swahili) are values of African culture which contribute to building and reinforcing community among African-Americans. Kwanzaa also has seven basic symbols that represent values and concepts reflective of African culture. The holiday culminates on December 31 with an African feast, called a Karamu. 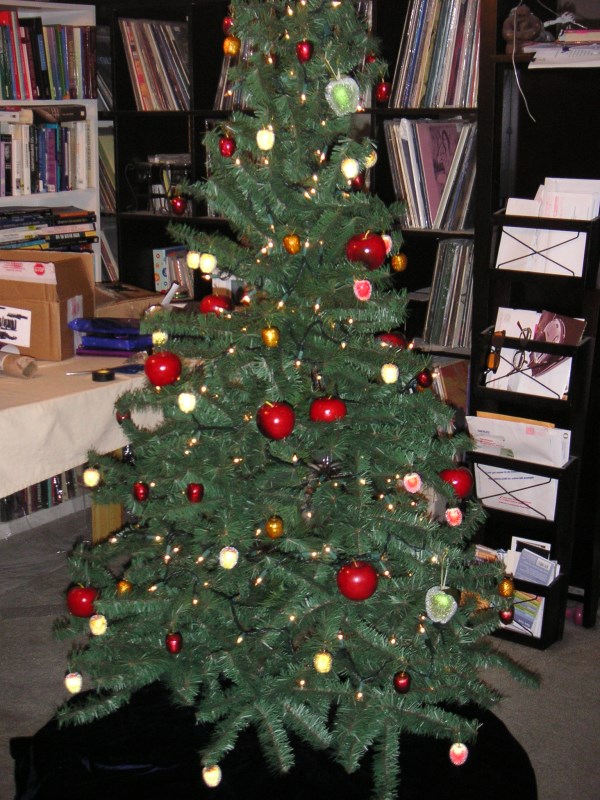 For atheists, holiday celebrations can range from nonexistent to a full family affair. “Newtonmas” is named in honor of English scientist Isaac Newton, who was born on December 25 according to the Julian calendar in use in England at the time.

The holiday, which was publicized by Skeptics Society founder Michael Shermer and featured in a 2009 episode of The Big Bang Theory, may include gifts of science books and humanist tracts. 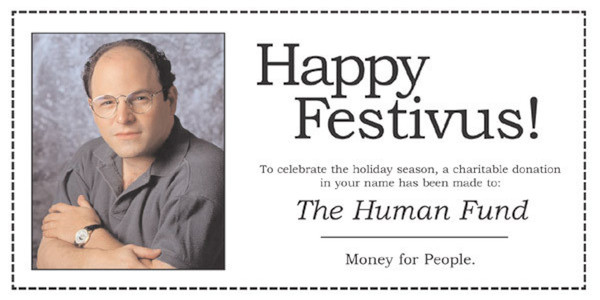 Introduced in the December 17, 1997 Seinfeld episode titled "The Strike," lovable curmudgeon Frank Costanza (Jerry Stiller) recalled buying Christmas gifts for little George. While shopping, Frank has a dust-up with another man over a doll. He thinks, "There has to be a better way!" and creates Festivus. The celebration brings together family and friends to air grievances over dinner, celebrate around an unadorned aluminum pole, and participate in "Feats of Strength" in which attendees wrestle the head of the household until he or she is pinned.

Seinfeld writer Dan O'Keefe provides a first-person account of an early version of the Festivus holiday as celebrated by his family in the book, The Real Festivus. O'Keefe's father, who originated some of the now-recognized Festivus traditions, used a clock as the holiday's decoration, not an aluminum pole (that tidbit was amended for the show). O'Keefe says, "The real symbol of the holiday was a clock that my dad put in a bag and nailed to the wall every year. I don't know why, I don't know what it means; he would never tell me. He would always say, 'That's not for you to know.'"

Saturnalia is an ancient Roman festival in honor of Saturn, an agricultural god of plenty, wealth and liberation, which pre-dates Christmas.

The Saturnalia festival was a celebration of Winter Solstice, which began on December 17 of the Julian calendar and lasted for seven days. It was marked with sacrifices, feasts, gifts and gambling, as Roman social norms were overturned. The reversal of traditional roles was such that slaves wore fine garments and sat at the head of the table. Homes were decorated with wreaths, similarly to modern-day Christmas celebrations.

When Christianity became the official religion of Rome in 312 AD, public events saw the continuation of the Saturnalia with Christian overtones. As late as 449 AD, Saturnalia was still celebrated and very popular, but only as a festival used to honor the god Saturn—the religious aspects of the holiday had disappeared. Over time, it was replaced with Christmas, which began in the Roman Empire and spread throughout the Mediterranean. By 354 AD it was marked on the Roman Philocalian calendar as December 25th.

Today, Saturnalia is celebrated in small events around the globe. In Chester, England, the Roman legion lights up the streets with a torch-lit parade, a traditional Roman event to, once again, celebrate the feast of Saturn.