Although the practice is slowly going out of style in many court districts, courtroom sketch artists are still widely utilized around the world.

In the U.S., courtroom sketches date all the way back to the Salem witch trials (1692-1693). Trial sketches were the only reliable visual records of what went on in the courtroom, right up until the late 19th century.

During the 1950s, the publication of news photos had reached an all-time high. Newsgroups used flash photography to cover every major story, which often included court cases. That worked for only a little while—many court districts viewed photographers as a major distraction inside the courtroom and banned them until the mid-1980s. It was then that the first cameras (and some camcorders) were allowed to be used in a courtroom without restrictions. However, they are still prohibited in some court districts, and only sketch artists are allowed where cameras and camcorders are strictly prohibited.

Sketch artists are not court-mandated or affiliated with any part of the legal system itself.

1The courtroom sketch that spawned thousands of memes

Courtroom sketch artist Jane Rosenberg has had an illustrious three-decade career with thousands of sketches under her belt. She had no idea her recent rendition of New England Patriots quarterback Tom Brady would make her a social media sensation and launch thousands of memes in the process.

Rosenberg's gaunt, unattractive sketch of Brady at the first “Deflategate” civil suit hearing in Manhattan federal court has led to social media backlash and comparisons to everything from “Lurch” in The Addams Family to the alien in E.T.

The artist apologized for the drawing, saying she didn't go out of her way to make Brady look bad but admitted it was hard to sketch beautiful people in such a short period of time. 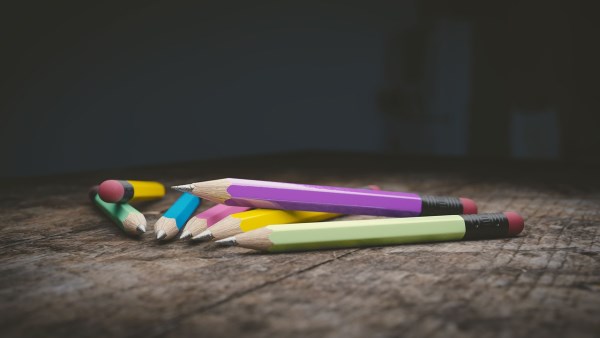 Businesswoman, author, and television personality Martha Stewart never forgets a face—especially that of Shirley Shepard, the courtroom artist who covered her trial for illegal trading in 2004.

In 2007, Shirley and daughter Andrea (also a courtroom sketch artist) attended a taping of Stewart's show. She immediately spotted the duo and pointed her finger right at Shirley. Stewart exclaimed, "I know you! She's the bad artist who did all those terrible sketches of me.” She then told Shirley to stand up. “Martha, you get prettier every day,” Shirley responded, a bit flabbergasted. “It was so rude and so embarrassing,” Andrea said later. A rep for Stewart declined comment.

Priscilla Coleman has been a court artist for ITN and newspapers in the UK for over 20 years. When working, she prefers to sit in the courtroom and not in a media annex, where the cameras tend to concentrate on only who is speaking (and the images are often too fuzzy.) She does not draw in court—to do so would be illegal—but like other court artists, she takes notes in shorthand describing what she sees.

Late singer Amy Winehouse looks like she's auditioning for the Rockettes, but she is, in fact, showing the judge her tiny feet in a 2009 assault trial. Coleman said, "She (Amy) was so pretty and delicate and had these lovely little freckles. She had a little notebook with her and scribbled all the way through her assault trial. I'm not sure what she was writing. The thing that was most memorable was how animated she was. She held her hands up to demonstrate what she was talking about and when the trial was over, and she had been cleared, she held her foot up to the judge to show him how small she was in flat shoes and how she couldn't have assaulted anyone. She was very charismatic." 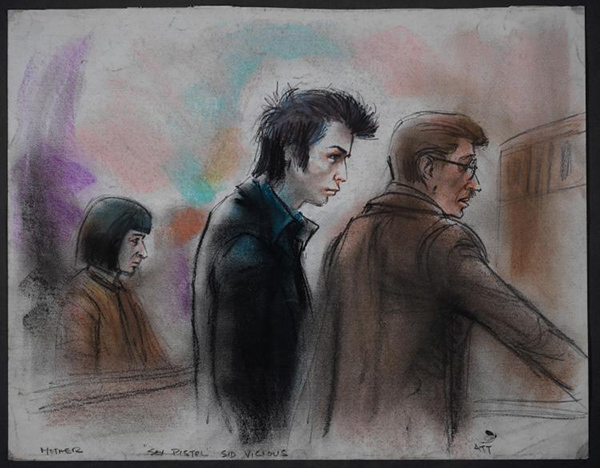 Ida Libby Dengrove was a courtroom artist who won two Emmy Awards for her illustrated coverage of the “Son of Sam” trial of David Berkowitz and the “Murder at the Met” trial of Craig S. Crimmins.

Using chalk pastels and charcoal pencils on a 14-by-17 sketch pad, she captured Sex Pistols bassist Sid Vicious as an accused murderer. Vicious woke up on the floor of his room at the Hotel Chelsea in New York on October 12, 1978. His girlfriend, Nancy Spungen, was dead on the bathroom floor of a single stab wound to the abdomen; she likely bled to death.

The knife that killed her belonged to Vicious. He would periodically claim that he stabbed her without intent to kill, or that he didn't remember the incident at all. He was charged with second-degree murder and released on bail, but assaulted Todd Smith (brother of punk rock singer-songwriter Patti Smith) and was sent to the Rikers Island Prison Complex.

He was released on bail again on February 1, 1979, and attended a party to celebrate his freedom. Sid's mother, who had acquired her son's drugs for years, obtained the lethal dose of heroin that killed him the following morning. He was 22. 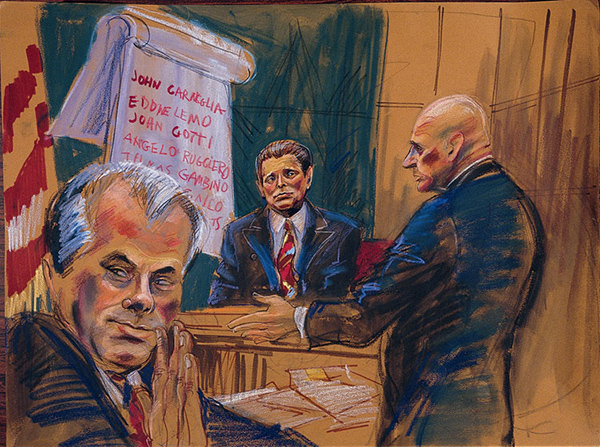 Just as the artist observes the court, the court at times observes the artist. Mob boss John Gotti closely followed the press coverage of his trial—he knew the artists and reporters and the media outlets they represented.

Gotti's brother once approached Church in court and complained that she had misrepresented the mob boss's hairline. A few days later, Church looked up to see Gotti himself gesturing to her.

Surprised, she looked back over her shoulder, saw no one, and turned again to Gotti. She gestured, "Who, me?"

He nodded, then pointed to his neck and wagged his finger in warning.

“He had been following the drawings,” Church said. “He was saying, ‘Don't draw my neck fat anymore. I'm watching you.'” 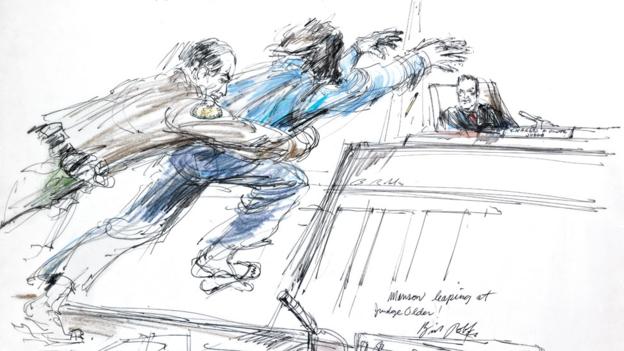 Just before Charles Manson was set to go on trial for multiple murders in 1970, an up-and-coming young artist named Bill Robles was looking for a job. He convinced the bosses at CBS News to give him a shot. They did, and for nine months he sat in on the Manson trial and captured some of its most iconic moments.

One image Robles created during the Manson trial is as legendary as the trial itself—the moment Manson attempted to attack the judge.

"(He had a) pencil in his hand that he dropped," Robles said. "He was wearing flip-flops, and he was tackled in midair by the bailiff. That image led with Walter Cronkite on the (national) news that night, so that was kind of cool."

From that moment on, Robles was an artist in demand. He has since sketched some of the most high-profile court cases in history including the trials of O.J. Simpson, Unabomber Theodore Kaczynski, Oklahoma City bombers Timothy McVeigh and Terry Nichols, and serial killer Richard Ramirez. 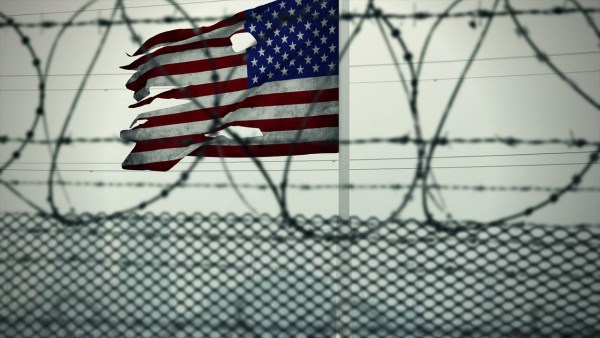 Award-winning artist Molly Crabapple took a trip to Guantanamo Bay and documented the experience with her art.

Crabapple's drawings of the defense camp's court proceedings were created from behind three layers of bulletproof glass. She also had a pair of glasses confiscated as "prohibited ocular amplification," and she couldn't bring anything out of the courtroom unless it was checked by an official court censor.

"There's this very tight visual control, but there's also the fact that you're being watched," she said. "You work out of a media operation center that's filled with soldiers. Your telephone has a sticker on it that says 'use constitutes consent to monitoring.'"

Court guards must remain anonymous, so Crabapple gave them sinister smiley faces. And after one rare session in which she was allowed to see the imprisoned men, her prison escort demanded that she scratch out the faces in her sketch, lest she draws them in later from memory.

8The sketch artist who illustrated a Beatle's acrimonious divorce 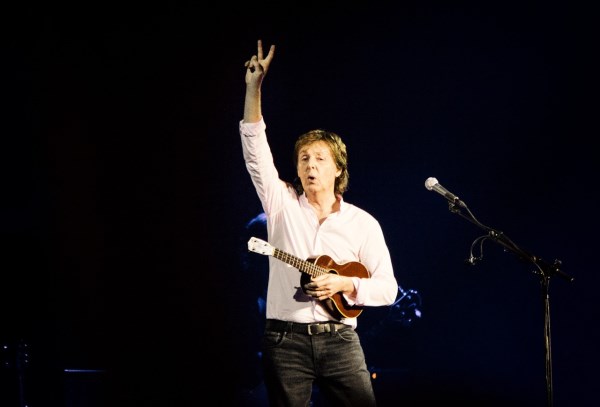 In 2008, Sir Paul McCartney's ex, Heather Mills, reportedly sought $125 million from the Beatle, who was found to have a net worth of about $800 million. Mills got a little under $50 million (which seems like a lot to us) and promptly dumped a pitcher of water on his lawyer's head.

The moment was not captured by the tabloid press because journalists are not allowed access to divorce proceedings in the High Court in London. It was recreated by the court's sketch artist, Priscilla Coleman, who drew Mills upending the pitcher on McCartney's lawyer, Fiona Shackleton.

Coleman had to base her image on glimpses and gleaned details. She had to stay outside in the corridor, so her drawings are based on visual snapshots she could snatch when the court door was opened. When Paul came out with Fiona Shackleton, Coleman noticed her hair was really wet. She knew immediately it was not from just a glass of water.

Mills, angry that she had received only a fraction of the amount she had sought, proceeded to give her side of things to the press outside the courtroom. And that helped Ms. Coleman capture the moment.