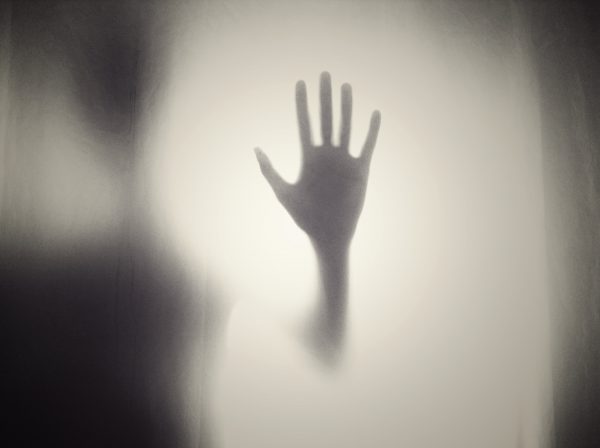 We’ve brought you love with inanimate objects, but how about love with an incorporeal person? Ever heard of someone that saw ghosts? Or someone who has been possessed? Well, Amanda Teague claims both! She said that she married a 300-year-old ghost pirate, and was possessed by him.

On July 23rd of 2016, Amanda Teague married her Haitian husband, Jack Teague, on a small boat in the Atlantic Ocean. The weather was stormy and waves were crashing wildly. Perfect for a ghost marriage, right? “We sailed into international water so we could legally marry. It’s not legal in the U.K. or Ireland to marry a deceased person, (probably for the best) so we spoke to some lawyers and did it officially,” said Mrs. Teague. The divorced mother of four children said “I do” in a white lace gown and veil. Did a voice reply in kind? Only Mrs. Teague and the Captain of the ship may know for sure.

Life Married To A Ghost

She claimed that they met in 2015. When she was lying in bed at her home in Drogheda, Ireland. She says she there sensed his presence. She kept “in contact” with him for six months, when they then made plans to make their love official. Similar to most relationships, the couple acts out when they’re jealous, have healthy arguments and go on weekend getaways together. Mrs. Teague told Newsweek that their wedding was similar to one held in a registry office, that is in the sense that it was short, small and functional.

The couple was wed again in October of 2017, which involved more people to celebrate their union. A register was present at the wedding and she said that Mr. Teague gave consent through a medium that was independent of her. Amanda even changed her last name to honor their union.

Mrs. Teague said: “I haven’t been challenged yet. There was one governmental agent who asked me to explain my situation and I told him about its spirituality and our connection. He just accepted that. If in the future I am challenged, legal advisers have told me that there are certain routes we could go down to try and get our marriage recognized by the law.” She had said that she would do anything to fight for their marriage. Now she warns you not to dabble in causal spirituality.

She ain’t afraid of no ghost.

“After two weeks of marriage, I started to get health problems. I started to get reoccurring perianal abscesses and I was suffering.” Perianal abscess is a collection of puss found under the skin surrounding the anus. “About four or five months in, when things started to go really downhill, I went back to some of the people that had communicated with Jack. I know the symptoms of possession and part of it is ill health. So I was concerned that it was to do with the relationship because of the timeline. But I was assured that he was a lovely spirit and wouldn’t harm me.”

However, when her dog died, Mrs. Teague said she spotted a major red flag. “I knew his passing was imminent and I’d asked Jack to keep him until it was my time so we’d all be together. But Toby (her dog) wouldn’t go to Jack. He (Toby) was incredibly aggressive and wouldn’t go near him. In the end, he (Toby) had to go to my mother because he just didn’t want to be near him (Jack). Animals are quite intuitive about people so this was a big red flag to me,” Mrs. Teague said.

After the couple moved on from the incident she said: “I was getting abscesses recurring all the time after Jack and I would have any sexual relationship.” That is right, she was having sexual relations with the ghost. She described these as the best in her life to Newsweek. “It was something that was at the back of my mind. I never had these before I was with Jack. Once I stopped having sexual contact with Jack, the abscesses started to improve. And I’d say that was literally the best three weeks I’d had since we got married.”

“So anyway, one night, a friend of mine got married to her spiritual partner and Jack and I ended up being intimate. The very next day, the abscess was back with a vengeance. So then I started to get really concerned.” In May 2018, Mrs. Teague was put in the hospital and had surgery after developing sepsis. “I almost died and I was in the hospital for a week.

I had to take my wedding ring off when I went into surgery. That must have cut the energy link between us because I felt totally different after the operation. I reconnected with my own spiritual team and I really saw a pattern about my health. I really saw alarm bells. He had obviously been blocking communication with my spiritual team. So I could see very, very clearly that he had been stealing my energy.”

Did they try making pottery?

Following the surgery, the doctors warned Mrs. Teague that she might need a colostomy bag due to her ill health. But she sought out the help of a former close friend who warned her against the spiritual union. “I had one person who had turned around to me and said what he thought I was doing was dangerous. I’d had a big row with him, but I picked up the phone and told him that I thought he was right.”

Her friend warned her that she had most likely been possessed by Jack. When she confronted Jack, she claims that he threatened to kill her if she attempted to break off their spiritual union. “His reaction when I told him he had to leave was that he wasn’t going too. And that if I tried to have an exorcism and get rid of him, he was going to kill me. It was terrifying seeing a completely different side to the lovely spirit I had seen before. But I knew in my heart that if I didn’t get rid of him, my health was getting so bad, that I was probably going to die anyway.”

Incredibly, following an exorcism, Mrs. Teague says her health has improved immensely. “Previously, I’d had an MRI scan in November which showed that my bowel was perforated. That’s something that doesn’t heal without surgery. So I had the exorcism and incredibly it healed up. I’ve not had any more abscesses or bowel problems since then. I went to the hospital recently and the junior doctor called in a consultant because she was like ‘I’ve never seen this before’.

If I hadn’t got the exorcism done, I think I’d definitely be going around with a colostomy bag.” Mrs. Teague had stopped working with spiritual stuff and stopped impersonating Jack Sparrow. She has also written a book about her journey. “I’ve quit it all because I’m terrified,” she said. The book is ‘A New Attitude,’ which you can get on Amazon.

Are you a believer?