It’s thought to be a veterinary first, the idea that this cat is neither male nor female. Originally, vets thought the kitten named Hope, was a female. However, once examined the cat was said to have no sex organs.

According to the vets, they’re aware of hermaphrodite cats, though they are pretty rare, too. But it’s different for Hope, the cat with no external or internal sex organs. Fiona Brockbank, Cat Protection’s senior field veterinary officer, says it could be a case of agenesis or the failure of an organ to develop.

Brockbank says she has never seen such a condition. Hope is described as a playful kitten, at just 15 months old. Ms. Brockbank said: “We carried out a procedure to look for sex organs but there’s nothing apparent inside or out.”

She continued saying, “There’s an outside possibility of some ectopic ovarian tissue hiding away internally but we think this is extremely unlikely.”

And that, “This is so rare that there isn’t really a commonly used term for this condition, but it is effectively sexual organ agenesis – where agenesis is the lack or failure of development in relation to body organs.” 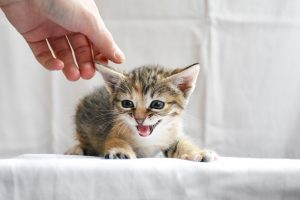 Hope is at Cat Protection’s Tyneside Adoption Centre, waiting to be rehomed. The veterinary officer added: “This is not something we’ve come across before at Cats Protection.”

“While this means we don’t have any previous cases to base our knowledge of how this will affect Hope in the future, we spent time monitoring this cat to ensure they can urinate and defecate appropriately before they were considered ready for rehoming.”

According to a spokesperson, Hope was first brought in with her mother and three other sibling kittens. The cats lived with a busy family that didn’t think they’d be able to give the kittens the attention they needed.

Beni Benstead, Tyneside Adoption Centre manager said, “Discovering Hope’s special status has been an exciting time as none of us have seen this before or are likely to again.”

“Hope has been a delight to care for and it is fantastic that they are now ready to be adopted. We know they will bring someone many years of fun and companionship. We would also be extremely grateful to hear updates on our Tyneside superstar.”