We’re going to be using the word “cannibal” here, but don’t worry. Unlike in our earlier story about human cell-based steaks, there’s no actual human meat involved here.

Instead, we’re going to be looking at a peculiar – and some might even call it disgusting holiday tradition. We don’t even need to travel very far, at least no farther than Wisconsin.

Wincosinites have a certain delicacy that at least some of them like to consume around this time of year. It’s called the cannibal sandwich, but some might be more familiar with the moniker tiger meat sandwich.

But both of these names are misleading. There’s neither human nor tiger meat on the bread.

What there is, on the other hand, is raw ground beef. The cannibal sandwich is a fairly simple treat, consisting of a slice of rye bread that’s piled with raw meat, chopped onions, and a dash of salt and pepper to taste.

The dish is at its most common in southeastern Wisconsin, according to Wisconsin Public Radio. That said, people elsewhere have developed a taste for it too, and it can now be found – although rarely – across the Upper Midwest.

But let’s dial back a bit, and repeat what we said: the sandwich is topped with raw meat. And that doesn’t make health officials very happy, especially with this year’s COVID Christmas. 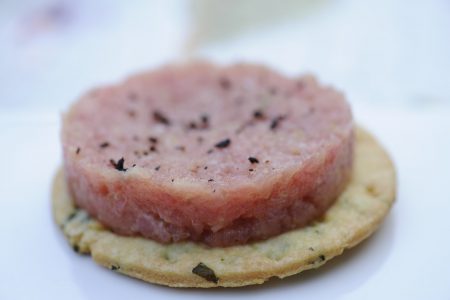 In fact, the Wisconsin Department of Health Services (WDHS) has felt the need to express their distaste for the cannibal sandwich publicly. The WDHS said in its “annual reminder” on Facebook that people should probably pass on the sandwich.

“Many Wisconsin families consider [cannibal sandwiches] to be a holiday tradition, but eating them poses a threat for Salmonella, E. coli O157:H7, Campylobacter, and Listeria bacteria that can make you sick,” the WDHS warned.

“And, no, it doesn’t matter where you buy your beef,” the agency added.

WDHS reminds people that ground beef should always be cooked to an internal temperature of 160 degrees Fahrenheit (that’s 71 degrees Celsius). Such a temperature is generally agreed to sterilize beef and kill any possibly harmful bacteria.

The WDHS is not alone with its concern over cannibalistic bread products. The U.S. Department of Agriculture (USDA) also warned consumers about the sandwich in a separate statement.

“The dish … is dangerous because it is uncooked, meaning it can still contain harmful bacteria that can cause foodborne illness,” warned the USDA.

Perhaps they health agencies are not overreacting. According to the USDA, “hundreds of people” across the Midwest fall ill every holiday season after eating the cannibal sandwich.

The WDHS has more accurate data. According to them, there have been eight significant sickness outbreaks in Wisconsin since 1986 that have been linked to consuming raw meat.

Among them was the large-scale Salmonella outbreak of December 1994, which left more than 150 people ill. This one, too, ultimately began with the cannibal sandwich.

Yikes. Maybe this sandwich is actually a really bad idea.

How About a Steak Instead?

But hold your horses! You might by now be thinking that the good people of Wisconsin are foolish to be willingly eating raw meat.

Before you make that judgment, though, consider that eating raw meat isn’t really anything all that weird. It’s popular enough in the U.S., and that’s without even taking into account the rest of the world.

Don’t believe us? Well, have you ever had a rare steak?

A lot of people like to see some blood on their plate after cutting into a steak (this author sure does). A rare steak has an internal temperature of only 120-130 Fahrenheit, a far cry from the USDA-recommended 160. And if you like your steak blue rare, that temperature falls even further down.

Granted, a steak is a whole piece of meat. Grinding your beef can make it less safe, as the grinding process itself might introduce harmful bacteria from the meat’s surface into the rest of it, says Eat Right.

But it’s not like that stops people from enjoying some bloody beef. The cannibal sandwich is actually just a variation of a dish known as steak tartare.

If you’re gagging at the idea of eating that, you’re perfectly within your rights to do so. However, a 2009 World Health Organization study found that if the meat is fresh and the cook follows basic hygiene, the risk of bacterial infection is actually very low.

There are even more raw meat dishes in the world than these, though. There’s the Italian carpaccio, the Ethiopian kitfo, the Dutch Ossenworst, the German Mett, and even the Pittsburgh Rare Steak.

If we leave red meat behind, you’ve definitely at least heard about sushi and sashimi, maybe even the Nordic gravlax. But did you know that the Japanese also have a dish call basashi – it’s basically sashimi, but with raw horse meat instead of fish.

Compared to all this, the cannibal sandwich suddenly doesn’t seem all that strange.

But as relatively popular as raw meat is, you still shouldn’t dismiss the health warnings. There’s no denying the facts – eating raw meat is always a bit of a Russian Roulette, no matter what.

If you can’t go spend Christmas without entertaining your inner cannibal, give this USDA recipe a try. Instead of doing raw meat on rye bread, cook your ground beef and serve it on smaller crackers.

“You may be surprised to find that it tastes better when cooked! Not to mention, you won’t be risking a trip to the hospital with every mouthful,” the USDA says.

We at Oddee can’t stop you if you’re determined to stuff pieces of fresh cow into your face this holiday season. But let no one say that we didn’t warn you – delicious though it may be, raw meat is always, always a risk.

Just please don’t start cooking your meat on an airplane.