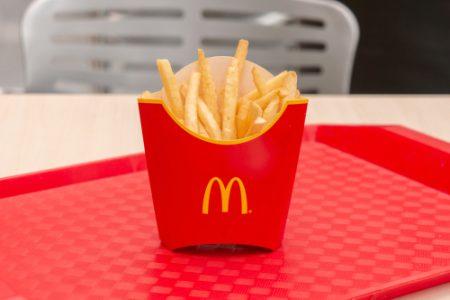 Everyone hates when you have to wait a long time for your food, and it’s not even good quality. You can eat it and leave, never to come back, or you can demand a refund, but when is it taking it TOO far? (How many times do we have to ask this question?) Apparently, someone thought it was ‘OK’ to pull out a gun over her cold fries, or at least that what it’s like in Georgia.

The restaurant owner told WTOC-TV of Savannah, Georgia, that the woman left with her order, and then came back, saying that her fries were cold. The manager went to get new fries, and the woman followed him back there and fired a shot on the floor. The owner says he gave the woman a refund, and she left.

Police Arrived At The Scene Shortly After She Left

They identified the woman as Lillian Tarver and took her into custody. An employee from McDonald’s (where the incident happened) recounted the whole thing to WTOC. Apparently, there was more to the story than the owner let on…

Ms. Watson said that their fight started as words, but quickly became physical. “We were physically fighting because I had to grab her because she was putting up a set like this. I had to seize my moment when I knew I could. When she bent down, I grabbed her hair and just started slinging her across the floor.” Ms. Tarver left and went to her car. She came back with her gun.

She Came In Ready To Shoot

“Then, we were in the back of the store. She came to the back of the store walking like, you know, she was ready to shoot.” Despite no one being hurt, many employees don’t feel safe. “I fear for my life and my family fears for my life.” Ms. Watson says that teenagers were working at the store during the incident. Ms. Watson is trying to get transferred, and it’s safe to say not many people will want to work there for a while. WTOC said that they tried to do a follow-up with the owner because he mentioned none of this during his interview, but he had failed to respond. As for Lillian Tarver? She’s facing aggravated assault and battery charges. It’s unclear what her punishment is the moment.