It really must suck being a celebrity — wherever you go, there’ll be somebody gawking at you with a camera to catch your every move. But as it usually goes with these things, it can get worse.

Law experts are now warning that paparazzi — or just plain old weirdoes — might soon be after more than just celebrity photos. They could start trying to pilfer the very thing that makes them who they are.

Allow us to introduce you to the concept of DNA theft.

We leave traces of our DNA everywhere we go. Flakes of skin, loose hair, fingernail, or that tissue you used to blow your nose have the building blocks of you on them.

Now, let’s say some nefarious character pulled that tissue out of the trash can. They now have your DNA and could theoretically do anything they want with it.

If we can accidentally turn hamsters into violent psychos by messing with their DNA, imagine what somebody with sufficient knowledge could do with your genetic material.

And the worst part of it all is that there’s not a darn thing you can do about it. According to the experts, our current laws are in no way prepared to handle a case where someone’s used another person’s DNA for shady reasons. 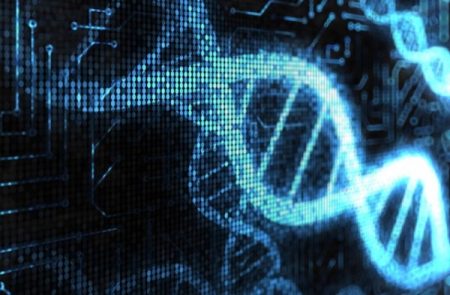 Has Science Gone Too Far?

The warning about DNA theft came in a recent essay published in The Conversation. In it, Liza Vertinsky, an associate professor at Emory University School of Law, and Yaniv Heled, professor of law at Georgia State University, lay out their disturbing vision of genetic crime.

For the longest time, there really wasn’t any reason to be worried about someone pilfering your genetic code. So what if they had your snotty tissue — there was nothing they could do with it.

But genetic science has advanced in strides over the past couple of decades. To begin with, scientists cracked the human genome in 2003.

That’s opened doors for fantastic achievements in medicine. But shady actors could also get in through that door.

Modern gene editing technologies, like CRISPR, have made manipulating DNA easier than ever. It’s still not easy, mind you, but it’s perfectly doable.

But somebody doesn’t even need to particularly do anything with your DNA to abuse it. Just having access to it tells a lot about you — after all, this is what makes you you.

Let’s say Dr. Hans von Evil got a hold of Joe Rockstar’s DNA. Von Evil could now map out Rockstar’s entire ancestry, his risk of developing certain health conditions, and what traits his future children could have.

If that doesn’t sound bad enough for you, did you know researchers are working on creating reproductive cells out of any genetic material? Von Evil puts Rockstar’s DNA out for sale and suddenly he has kids all over the place.

Some celebrities, for their part, are aware of the risks of someone stealing their genetics. For example, in 2016, people made fun of Madonna for having her dressing rooms sterilized and insisting that she gets a brand-new toilet seat wherever she performs.

Some even suspected that she might be suffering from DNA paranoia. But she doesn’t seem so crazy now, does she?

But so what if someone steals a celebrity’s DNA? They can afford good lawyers and sue the thief.

That’s the problem. They could sue, but Vertinsky and Heled warn that the existing laws probably wouldn’t help at all.

There are plenty of unanswered questions about laws as they relate to DNA. Is your DNA your personal property? Does the right to privacy extend to keeping others from knowing your DNA?

We’re pretty sure the U.S. Constitution doesn’t define how your DNA is protected. So where do we start drawing lines?

What few precedents we have aren’t very promising. To go back to Madonna, she lost a court case where she tried to stop an auction of some very personal items.

Those included her hairbrush, with some of her hair still in it, and a pair of her underwear. You probably could extract her DNA from either.

“It is outrageous and grossly offensive that my DNA could be auctioned for sale to the general public,” Madonna argued at the time.

Not Just About Celebrities

But you don’t care about celebrity drama, do you? That’s fine, but this drama could very well be about you, too.

Imagine somebody showing at your door with a young child in tow. They claim that it’s your child, say they have genetic proof, and demand you pay child support.

But you’ve never seen this person or the kid in your life. How on earth does this child exist?

It’s simple. Somebody picked up a piece of gum you tossed away and extracted your DNA from it.

Vertinsky and Heled do admit that “most people don’t need to worry about surreptitious collection and use of genetic material in the way that public figures might.” But the possibility is still there.

Maybe this is all just fearmongering and there’s nothing to worry about. But you might want to stop shedding skin and hair in public places.

You can do that, can’t you?