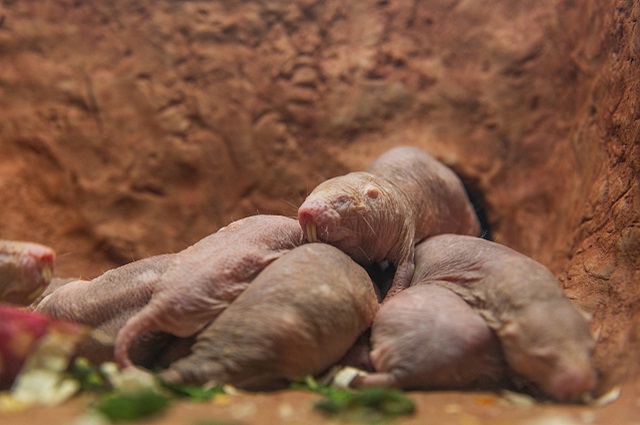 The entire kingdom waited with bated breath. All eyes were on the few eligible to arise as queen. There were clear forerunners, but until one emerged with offspring displayed for all to see, it was anyone’s guess. But one thing was certain – There must be a Queen.

Sounds like a warped episode of Game of Thrones, doesn’t it?

That’s the drama that the zookeepers at the Smithsonian National Zoo have been living out with their colony of naked mole rats.

Naked mole rats are one of the few mammalian species that are what are called eusocial. That means a single female or cast of females reproduces for the entire colony.

Scientists still aren’t sure exactly how the reproductive system in naked mole rats is suppressed, but as long as the female remains within the colony they never reach maturity to reproduce. Removal from the colony restarts the process. It was once believed that it was a pheromone within the urine, but that has since been debunked. The general hypothesis is that the Queen may secrete a pheromone, paired the behavioral triggers, that keeps the others from being able to reproduce.

Furthering the Game of Thrones feels, the only way to replace a queen is to kill her. Then it’s a race to see who breeds first. Queens are predominately larger than other females, with a few other biological differences. Their size helps deter others from rising up against her, but others of similar size still have a shot. The frontrunner for the crown at the Smithsonian was obvious according to zookeepers, who said she was the largest of the colony.

The Queen doesn’t just have the responsibility of reproducing for the colony, she gets the perks as well.

She chooses who she breeds with and the other female tends to her every whim. Mole rats eat their own and each other’s feces, mostly to ensure no nutrients go to waste. It’s believed it’s also to pass along the hormones that drive the other females to care for her offspring. They’ll also cover themselves in her poop. This is to help identify members of the same or differing colonies in the wild since naked mole rats are blind.

Even with the hormones, the Queen must continue to physically assert to dominance over the other females for fear of an uprising. She’ll forever have a target painted on her back for the next aspiring wanna-Queen that thinks she could take her.

Naked mole rats can labor up to 24 hours, and litters can be anywhere from 12-28. The Queen’s body could elongate before each litter to accommodate a larger litter size next time.

On December 17th, the sun rose on two of the Queen’s first offspring, Her Majesty had one more pup before calling it quits, anointing her position of rightful ruler of the Smithsonian National Zoo colony. Visit the Naked Mole Rat Cam to take a look at the Queen’s subjects scurrying about for yourself.