Road rage is not uncommon. Almost everyone has ill thoughts about each driver around them but it’s what you do about it that determines how bad your road rage really is.

Some people just think bad thoughts, others say something out loud, and others yell, shout, swear, shake their fits, use their middle fingers, and more. And in this case of road rage, it was something different.

A motorist told an angry cyclist that he can use cellphone safety and then he proceeded to hit another car. Fail.

A Scottish Bicyclist filmed a motorist using a cellphone while driving and then he confronted him about it. Just short moments later, the driver crashed  into another car after claiming he could safely drive all well fiddling with his phone.

No one appears to have been hurt in the fender-bender crash, but some might say karma was served. 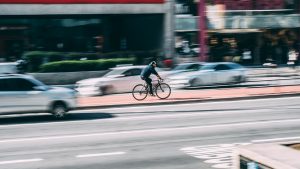 The edited viral video shows the encounter that took place last week. The cyclist, Dr. Dave Brennan, pulls next to the driver in traffic and yells at him when he claims he can safely use his phone while commuting.

The driver pulls away with the light and later slams into a car that had stopped in front of him.

Brennan showed the video evidence to the motorist whose car was struck by the phone-obsessed driver but in the end the two drivers decided to settle the matter themselves.

Brennan is a safety advocate and said that he previously had footage that he used from his helmet cam to help convict other distracted drivers. Talk about bike police.

“Cameras are absolutely critical,” he said. “Had I gone to the police in these cases without a camera, it would have been my word against the drivers’.”