The police in France have cracked a decades-long mystery around a notorious serial murderer and rapist. They now know who the killer is, but, unfortunately, they’ll never bring him to justice.

What’s worse, it turns out the murderer was himself a cop. The man clearly didn’t think he should protect and serve.

La Grele, or the Pockmarked Man, carried out several killings in Paris between 1983 and 1994. The only clue as to his identity was the murderer’s acne-scarred face.

Breakthroughs in the investigation finally led the police to suspect Francois Verove, a fellow officer. Verove was summoned to provide a DNA test but he never showed up.

When officers showed up to fetch him from his seaside apartment in Grau-du-Roi, near Montpellier in southern France, they discovered Verove’s dead body. He had swallowed a fatal dose of medication before he could be arrested.

But Verove hadn’t gone before revealing himself as the murderer. In a suicide note he confessed to the crimes.

“I admit being a great criminal who committed unforgivable acts until the end of the 1990s,” Verove wrote, according to Independent. 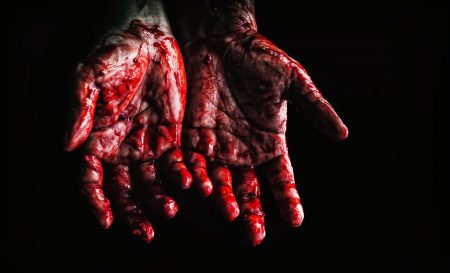 ‘Have a Very Good Day’

The La Grele murders were excessively brutal and shook Paris to the core. Just a heads up, this story will get messy, so if you’re sensitive to violence go look at these kittens instead.

Cops don’t know exactly how many people Verove killed during his reign of terror. He didn’t name any particular crimes in his note, but a post-humous DNA test has connected him to several murders.

The most infamous of Verove’s killings was that of 11-year-old Cecile Bloch in May 1986. Verove abducted Bloch as she left her apartment building to go to school.

The girl’s half-naked dead body was later found in the basement of her home apartment block. After raping, strangling, and stabbing Bloch, Verove had hastily thrown an old carpet to cover the remains.

Residents of the building told investigators that they’d seen a strange man with an acne-scarred face in the building’s elevator. That’s how Verove acquired the nickname La Grele.

“He seemed very sure of himself,” said Bloch’s half-brother Luc Richard, according to The Daily Beast.

“He spoke to me in a very bold, very polite way, too, saying something to me like: ‘Have a very, very good day,’”

The then-mysterious La Grele also carried six different rapes. In the cases of a 26-year-old German woman and two girls aged 11 and 14, the rapist had brazenly told his victims that he was a policeman.

When he wasn’t out carrying out his repulsive acts, Verove reportedly kept his true nature carefully in check. He was married with two children, and neighbors said he was a quite family guy.

“He regularly came to help out my wife Therese’s computers. In a few minutes he had everything restored.”

Just as a side note, we’re not trying to build sympathy for Verove. We’re only including this to show how well even such a disgusting human being can disguise who he really is.

For the longest time, the police weren’t able to get on Verove’s trail. The only thing they knew for sure was that the murderer had a scarred face.

According to local reports, a police sketch depicting the Pockmarked Man hung on the wall of a Paris criminal investigation unit for decades. Finally, the police figured out a crucial detail.

For decades, they had thought that La Grele’s identifying himself as a police officer was a mere ploy to win his victims’ trust. The thought that he might’ve actually been a member of the gendarmerie never even crossed their minds.

But new evidence that wasn’t disclosed to the media in detail led the police to ultimately taking the murderer’s claim seriously. It didn’t take long for the cops to put two and two together and start suspecting Verove.

Unfortunately for his victims, that came way too late. Sure, the monster might be dead, but he died as a free man.

The relatives of those he killed will never get the full closure of him being properly brought to answer for his crimes.

“I manage to live, but I have a great feeling of injustice, irreparable,” said Jean-Luc, remembering his little sister.