A while back we featured a story about the Brood X cicadas that are emerging in the eastern U.S. More specifically, it was about the psychedelic fungus that makes their butts fall off.

But the fungus isn’t the only threat the cicadas face as they crawl out of the ground for the first time in 17 years. Apparently, they also have to watch out for hungry people.

We know that because the U.S. Food and Drug Administration (FDA) felt it necessary to issue an allergy warning about the cicadas.

“Don’t eat cicadas if you’re allergic to seafood as these insects share a family relation to shrimp and lobsters.”

Welp, the more you know. If shrimp make your throat swell up, you better steer clear of these yummy, yummy bugs. 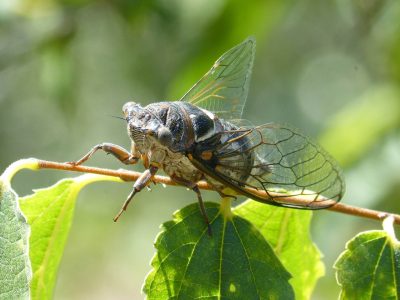 But hold on just a hot minute here. Let’s unpack this tweet, shall we?

First of all, people actually eat cicadas? And its so prevalent that the FDA has to issue a warning?

Apparently so. You can even get a whole recipe book dedicated to the bugs.

Among the recipes are dishes such as soft-shelled cicadas, cicada dumpling, cicada stir-fry, chocolate-covered cicadas… The list goes on.

Strange as it sounds by today’s standards, cicadas are actually pretty good eating. Gene Kritsky, the Dean of Behavioral and Natural Sciences Mount St. Joseph University who has studied the bugs for years, says they have a pretty good nutritional profile.

“They’re high in protein and they’re low in fat. They’re herbivores. You have a declining amount of energy used to go up the food web,” Kritsky explains.

He adds that female cicadas are better eating than the males since they carry eggs. The male cicadas’ abdomen is mostly hollow, so there’s not much to eat there.

What’s more, munching on cicadas actually has a long history in the U.S. According to Kritsky, they were fairly common fare for Native Americans.

The Cherokee of North Carolina, for example, used to eat cicadas fried in hot fat. They also stockpiled them for leaner times by preserving them in brine.

“Apparently the Iroquois would harvest cicada nymphs. The Indigenous populations were consuming them,” confirms Kritsky.

But it wasn’t just the Native Americans who enjoyed a good cicada. When Europeans came along, they also started using the bugs in cooking.

Kritsky says that cicadas were such a big part of the Colonial diet that they wrote recipes for them. The older surviving cicada recipes are from the 1700s.

“The oldest record of Brood X actually includes the English settlers in Philadelphia eating them, way back in 1715,” says Kritsky.

On June 6, 1902, the Cincinnati Enquirer newspaper published a recipe for a cicada pie. The instructions go as follows:

“Put the mixture into a pie crust and place a crisscross pattern similar to that of an apple pie. Bake at 400 degrees until the crust is done; people who’ve enjoyed this pie claim it tasted like partridge.”

Kritsky actually tried this recipe back in 1987 when his colleague decided to make the pie. He says that he doesn’t know if it tasted like partridge, but it wasn’t all that bad.

“They are very soft, and there’s no sticky bits or sharp bits that will get you. You can digest it all pretty easily,” he says.

“It had to me a very green flavor, which I felt was surprising because they’re sucking on the xylem tissue of roots that spring water and minerals from the roots up to the leaves. The flavor I’ve likened it to was whole canned asparagus — very green.”

So, what should people do if they want to try whipping up their own cicada pie? According to Kritsky, it’s important to harvest the cicadas just when they’ve climbed up from the ground.

“They climb up a vertical surface and skin cracks open at the back, and they start to pull out as an all-white cicada – all white and free from the brown skin. That’s what you want to collect,” Kritsky explains.

After collecting them, Kritsky instructs curious cooks to rinse the bugs very well with running water. Coming from the ground, they could be covered in bacteria and fungi – including the one that makes their butts fall off.

However, you shouldn’t go nuts on filling buckets upon buckets with cicadas. The bugs are threatened, and that’s why Kritsky says that he personally doesn’t eat them anymore.

“In the 1890s, the USDA suggested they may be in danger of going extinct over time,” he says.

“My research … shows they are really in decline, so I can’t eat them. I like them too much.”