Who doesn’t like a nice car? Whether you go for a quirky VW Beetle, a fancy BMW, or a gigantic pick-up truck, taking to the road in a slick ride is just… Well, nice.

But cars have a lot of history behind them, and not every car design through the ages has been a hit. Some have been ugly, others have been unpractical, and then there are some that are just… Bizarre.

Of course, there are concept cars that are supposed to break conventions, but that’s not we’re interested in. Here are eight of the most mindboggling cars that actually saw mass production.

Let’s start with a real classic – at least when it comes to hideous cars. The 1998 Fiat Multipla has won multiple awards for the ugliest car ever made.

It’s easy to see why. Seriously, just look at that thing. What designer came up with this and thought, “Yeah, this is what we’re going to go with.”

It just doesn’t seem like any two parts of this car were made to go together. From the weird fishbowl-like passenger compartment to that… Lip or whatever it is at the hood, the Multipla just exudes hideousness.

Those unfortunate enough to have bought this abortion of design thinking said that despite it’s looks, the Multipla was roomy and practical. Suppose there’s a silver lining to everything.

The Isetta had at least four manufacturers over its lifespan. Most famously, though, this strange three-wheeled bubble was built by BMW.

This one isn’t necessarily all that ugly. In fact, the Isetta is actually kind of cute in its own way. But it is weird.

To begin with, it doesn’t have any side doors. You get in by opening up the entire front panel, windshield, dashboard and all.

Despite its strangeness, the Isetta was actually pretty popular at the time. According to some reports, people worldwide bought more than 161,000 units.

Nissan produced the S-Cargo for only three years, and for a good reason. Nothing about this car worked as intended.

The S-Cargo (get it, it sounds like “escargot” and the thing looks like a snail) was intended as a compact delivery car. They just made it too compact.

Those with the honor of driving this snail said it was too tiny to make even the smallest delivery. Add to that the, shall we say, questionable look of the S-Cargo and you can see why it died so quickly.

Nissan only ever made about 8,000 of these cars. We’d say that’s roughly 7,999 too many. One can be allowed to serve as a warning to other car companies.

If you’ve ever wanted to drive a triangle, then the Citicar was the car for you. It was also an electric vehicle, so it was environmentally friendly.

And that’s about all the good things we can say about it. The Citicar represents some kind of a weird experimental period in car design that we’re glad didn’t catch on.

Then again, if it did, we’d all be driving triangular cars now and the Citicar would look completely normal. Fortunately, that didn’t happen.

If the name Messerchmitt sounds familiar to you, they manufactured fighter planes for Nazi Germany during WWII. After the war, the company decided to try its hand in car making.

And that’s where we got the KR200. Clearly, post-war Germany had a thing for bizarre three-wheeled cars, what with this thing and the Isetta.

You can easily see Messerschmitt’s history as an airplane manufacturer in the KR200. The canopy opens upwards just like one on a plane.

Maybe this thing was just a way to recycle unused airplane parts. It sure looks like it. 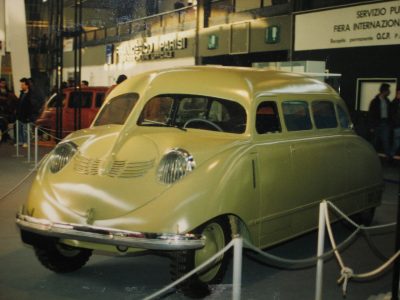 Before the Dodge Caravan and soccer moms, there was the Stout Scarab. It’s often credited as the first minivan, the precursor to all the SUVs plaguing suburban neighborhoods today.

The Scarab kind of looks like someone took a VW Beetle and stretched it out. Or maybe Volkswagen shrunk down the Scarab, since the Scarab came first.

You know, this one doesn’t even look all that bad. Sure, it’s an odd shape, but it’s really no worse than the Beetle.

There’s just one problem – they hadn’t figured out how to make sliding doors yet, apparently, and the Scarab only had two small doors up front. Getting into the backseat could be a real issue.

Really, a Mercedes is usually shorthand for a good-looking, expensive car. That’s really not the case with this six-wheeled monstrosity.

Granted, the G 36 6×6 was originally designed for the Australian Army, so fashionable looks probably weren’t a top priority. But in 2013, it entered mass production, albeit only for two years.

We can’t believe this behemoth is street-legal, but lo and behold. On top of it all, when Mercedes-Benz stopped producing the G 36 6×6 in 2015, they said they’d still sold more of them than they ever expected.

The Nissan Cube has to be the most aptly named car in history. Because that’s what this thing is. It’s a friggen’ cube.

The original Cube from 1998 was honestly pretty unassuming in looks. But in 2002, Nissan decided that they wanted it to look so much weirder and introduced the Cube’s second generation.

To begin with, they made the thing asymmetrical. The back window loops around one of the back corners on the left or right, depending on where the car was sold.

Also, unlike most SUVs, the rear door opens to the side instead of up. Hope you never have to open the back with someone parked behind you.

The Cube doesn’t fare much better in the front either. The round headlights just make the car look surprised that it exists.