We all know that food prices are high and some are just so unnecessary. While some foods are just that difficult to grow, harvest, and produce. Like this fruit, the durian.

This Indonesian variety of the durian is pungent, spiky, and considered a delicacy across many parts of Asia. It’s also quite expensive and has been sold in a store on the island of Java for $1,000 per fruit. Yike.

Dubbed the “J-Queen,” this durian was selected by a panel of farmers in a region of central Java because it was deemed to have a special taste and texture, according to Sudarno, the farmer who grew the fruit.

Two other types of rare durians were displayed in a perspex case in a store in Tasikmalaya, a neighboring province. The fruit was sold for 14 million rupiah or about $1,002 each.

When asked why anyone would pay such a high price, Sudarno explained that the harvest from this particular tree has failed in past seasons but a new fertilizer helped to produce fruit this year. 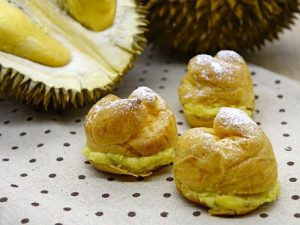 “It’s sweet..fluffy and delicious,” Sudarno sad. He described the texture as creamy like butter. Durian are often grown in family orchards or small-scale farms and are hugely popular in many parts of Asia.

The inside may be described as sweet but the smell of the exterior of this produce? Not so much.

Durians are described as smelling like an open sewer or turpentine when ripe. The smell is so bad that this fruit is banned in some airports, public transportation, and hotels in Southeast Asia.

Sudarno said that most of the 20 durians produced by his tree were premature, but that there were four for sale. Two were sold and the others were pulled from the display after their quality had faded.

He does not know who bought the fruit.