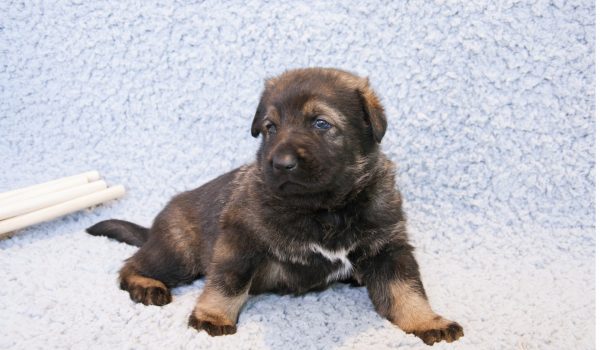 China is pushing forward with cloning. Their goal is to replace police dogs with dogs cloned after the best and brightest dogs currently on the force. Reducing training time due to genetic traits passed on means less expensive police dogs. At least, in theory. The cost of cloning a dog is just as expensive as training a new one. The biggest bonus is that you’re more likely to get a well-trained police dog. Training doesn’t guarantee to take with every dog. Some dogs are just more suited for the role than others.

That’s why cloning dogs that took to the training well could help.

Huahuangma, the seven-year-old wolfdog is an exceptional police dog for China. She’s earned the title first-class meritorious dog for helping to crack cases as a sniffer dog. Referred to as “world class” and “one in a million”, Huahuangma shares a 99.9% DNA match to Kunxun, her three-month-old clone. In one of her more high-profile cases, Huahuangma helped find a crucial piece of evidence – a hotel key – that led to the arrest of a murder suspect in 2016.

And Kunxun shows promise. Since arriving in Kunming, Kunxun has adjusted well to the local environment, the base’s project analyst Wan Jiusheng told Science and Technology Daily. “She is friendly to humans, sociable and alert,” said Wan, adding that the pup is not scared of the dark or unfamiliar spaces, has a strong sense of smell and can quickly find hidden food.

Typical police-dog training takes 5 years and the equivalent of $60,000. The cloning company, Sinogene charges $56,000 for each cloned dog. “Currently, police dog cloning is still in the experimental stage. We hope in the next 10 years, once the technology becomes more sophisticated, to mass clone exceptional police dogs,” project analyst Wan said.

Cloned police-dogs is a prospect that’s exciting and terrifying. How far does this method go and what’s the next service animal to get the cloning treatment? And what does this mean for future practices of cloning?