Emotions can run wild at a funeral — there’s nothing wrong with that. You should still try to keep yourself somewhat in check, though, so you don’t end up with a massive family brawl.

That’s what happened at a recent funeral in Richmond, California. What started out as an argument between two family members quickly got out of hand.

By the time the police got to the scene, 20 funeral-goers were at each other’s throats. One of the original hotheads had also taken his car and tried to run over his sister.

Once the cops got everybody to calm down, the fighting family had tipped over the coffin, broken a water main, flooded a garden, and caused thousands of dollars in damage.

“We sometimes get family disputes at the cemetery or at the church. … This one went above and beyond,” Lt. Matt Stonebraker, a spokesman for the Richmond Police Department, told SFGate. 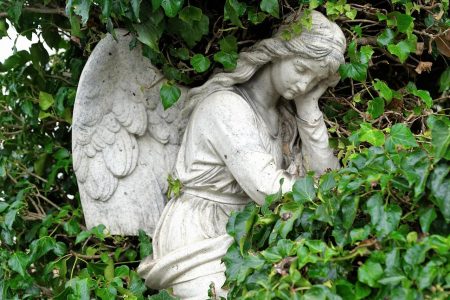 Let’s go over the event moment by moment and see what happened. The funeral in question took place on August 6.

A family had gathered to lay a deceased grandmother in her final resting place. Unfortunately, there was some bad blood within the family.

According to Sgt. Aaron Pomeroy, a 36-year-old brother and his sister — grandchildren of the elderly woman to be buried — did not get along.

“It goes back many years,” said Pomeroy.

If their enmity was so long-lasting, perhaps it would’ve been best for the family to keep the siblings away from each other. But that clearly didn’t happen.

At some point, the brother and sister got to talking. And as was their habit, they soon got into a vocal argument.

Somebody did try to defuse the situation, though. Pomeroy said that as things started getting heated, the sister’s boyfriend came over and encouraged the sister to be the bigger person and just walk away.

That was a big mistake.

Going for a Drive

The brother wasn’t pleased that someone tried to interrupt his argument with his sister. So, he pounced on the boyfriend.

“The brother started beating on the boyfriend. That’s when it escalated and it became a brawl and we started to get calls,” Pomeroy said.

Fists started flying all around. Somebody also reportedly pulled out a gun they’d brought to the funeral.

According to Pomeroy, the person had the gun because they knew of the long-standing feuds within the family. Forgive us, but maybe at that point, you should just skip the funeral.

As the fight continued and police received reports of a potentially involved firearm, the brother decided he’d had enough. He dashed to his car, got in, and slammed the gas pedal down — aiming to run over his sister.

“He attempted to drive toward his sister in an aggressive way. Instead, he struck another [33-year-old] female and sent her to the hospital with non-life-threatening injuries,” Pomeroy reported.

While rampaging through the scene in his car, the brother ripped up plenty of the cemetery’s grass. He knocked over several headstones and vases.

The brother also somehow managed to break the cemetery’s water main. As a result, he flooded the funeral director’s grandmother’s plot.

As a crowning achievement, the brother hit his own grandmother’s casket and sent it crashing to the ground. At least the body didn’t fly out of the coffin.

After his little drive, the brother got out of his car. That’s when somebody decided to beat him over the head with a cane.

“They used the cane to try to get him under control. The suspect was hit a couple of times,” Pomeroy said.

At this point, the cops finally arrived to stop what they called a “chaotic altercation.” After receiving care for his injuries, the brother was arrested for felony assault with a deadly weapon and vandalism.

Altogether, the family brawl ended up causing an estimated $20,000 in damages. The Rolling Hills Cemetery said they would cover the cost of repairing any damaged grave plots.

The family members might want to let the police know beforehand when they’re planning their next family get-together.