If you don’t know much about Cambodia, you should at least know that its tropical nature is breathtaking. The mountain of Phnom Bokor in the country’s southwest is particularly amazing.

There, you can spot many different kinds of fascinating wildlife. You may find the Malayan sun bear, the slow loris, the clouded leopard, the penises…

Oh, sorry, our mistake. We meant the pitcher plant Nepenthes bokorensis, which just kind of looks like a penis. 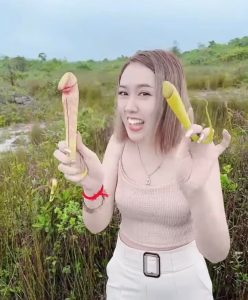 The plant’s resemblance to a phallus hasn’t been lost on people, particularly tourists. They’re harvesting the genital-like plants at such a pace that the Cambodian government has felt the need to chime in.

In a May 11 Facebook post, the Cambodian Ministry of Environment submitted a plea to the public. Accompanying the post were pictures of three young women posing with collected N. bokorensis pitchers.

“What they are doing is wrong and please don’t do it again in the future!” the machine-translated post reads. Our apologies, but we can’t actually read or speak Cambodian.

“Thank you for loving natural resources, but don’t harvest so it goes to waste!” the ministry added.

Each of the women depicted in the pictures is holding a variety of floral penises. The one who gathered the most has scored four of them.

Then again, we suppose they could’ve picked just the four pitchers and shared them for the selfies. We can’t really tell — the plants just look like a bouquet of d***s.

But why is picking the dong plants such a big deal? It’s the usual reason — they’re endangered.

N. bokorensis grows only in the mountains of Kampot Province, which includes the Damrei Mountains. Cambodia, unfortunately, has one of the highest deforestation rates in the world, which is now also threatening the penile pitchers.

They did fairly well for a surprisingly long time, though. Their habitat lies deep within the Bokor National Park, and so they remained largely undisturbed until 2009.

But then Cambodia’s government leased Phnom Bokor for private development. Now, the building of the large-scare Bokor City is encroaching on the penis plants’ territory.

There are two silver linings to the three women’s phallic flower picking escapade. They may not have actually killed the plant.

The pitchers, which are the parts of the plant that resembles a penis, aren’t the entire plant. They’re modified leaves that the plants use to catch insects.

The pitchers emit sweet-smelling nectar that attracts bugs. When a hapless fly buzzes up for a snack, it will slip on the pitcher’s slick surface and fall into digestive fluids.

This way, the plants can supplement the meager diet they get from the low-nutrient soil they grow in. So, the women didn’t kill the plant immediately — although it may eventually starve to death.

Admire the Penis but Don’t Touch

The second upside of the women’s choice of plant is that they actually did choose N. bokorensis. Some early reports about the Cambodian government’s announcement mistakenly identified that plant as the related Nepenthes holdenii.

This isn’t the first time, either, that Cambodian authorities have had to remind people not to go fondling the penises they find growing on wild bushes. The Ministry of Environment also submitted a similar plea in 2021.

François Mey, the botanical illustrator who originally described both N. bokorensis and holdenii said it’s alright to be amused by the plants.

“If people are interested, even in a funny way, to pose, to [take] selfies with the plants, it’s fine. Just do not pick the pitchers because it weakens the plant, because the plant needs these pitchers to feed,” Mey said.