He was blind, but now he sees. A man who lost his eyesight decades ago is now able to see objects on a table and the stripes of a pedestrian crossing – all thank to algae.

The borderline miraculous recovery was detailed recently in the journal Nature Medicine. It promises to be a breakthrough in both medicine and medical engineering.

But let’s backtrack a bit and start from the beginning. First, we’ll introduce the protagonist of our story.

He’s not named in the reports, so let’s call him… Say, Mr. X. The now 58-year-old Frenchman’s troubles began exactly 40 years ago.

When he turned 18, doctors diagnosed Mr. X with a condition called retinitis pigmentosa (RP). That’s a fancy way to say that the light-sensitive cells in the back of your eye will eventually die off due to faulty genes.

These genes are supposed to produce proteins that keep the light-sensing cells alive. But because they don’t function correctly, the protein supply soon reaches zero and the cells die.

RP is a rare condition, affecting only about one person in 4,000 globally. In the worst-case scenario, the condition can lead to total blindness.

Mr. X happened to pull the shortest of the short straws. His eyesight deteriorated over the following 20 years to the point that he can only tell whether he’s in complete darkness or bright daylight. 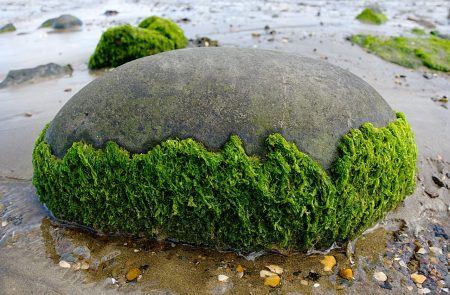 Got Some Gunk in His Eye

During the past 20 years that Mr. X spent in darkness, doctors were busy developing a new branch of medical science. It’s called optogenetics.

Optogenetics has been used in neuroscience for a long time, but it’s a newcomer in the medical field. It’s based around using proteins from light-sensitive algae.

Thanks to these proteins – called channelrhodopsins in science circles – the algae can tell which way is the surface is based on sunlight. This helps them swim up closer to the sun for some sweet, sweet photosynthesis.

So how would these proteins help Mr. X? Well, since the light-sensing cells in his eyes suffer from a lack of proteins, the doctors figured that feeding them with rhodopsins could bring them back to life.

And that’s just what they decided to try. The doctors took the rhodopsins from the algae and introduced them to the surviving light cells in one of Mr. X’s retinas.

In theory, the proteins should help the light cells transfer electrical signals to the brain when they’re hit with light. There was just one problem.

The rhodopsins made Mr. X’s eye cells respond only to amber-colored light. So, the doctors gave him a pair of specially engineered goggles to wear.

The goggles have a video camera in the front, and they project the picture onto Mr. X’s eye at the right color wavelength. The doctors hoped that this help the rhodopsin levels build up and activate Mr. X’s eyesight again.

Good Things to Those Who Wait

The doctors warned Mr. X that it would take some time for the rhodopsin levels to hit the sweet spot. Unfortunately for him, nothing seemed to happen.

Months passed by, and he still couldn’t see a thing. Only, he was not stuck with the weird goggles on his face.

Dr José-Alain Sahel, from the Institute of Vision in Paris, said that Mr. X started to get impatient as time went on.

“This patient initially was a bit frustrated because it took a long time between the [rhodopsin] injection and the time he started to see something,” Sahel told the BBC.

But then, finally, it happened. Mr. X was out on a walk, crossing a road, when he realized something.

He could see the stripes of the pedestrian crossing underneath his feet. An alternating pattern of white paint and black asphalt.

“When he started to report spontaneously he was able to see the white stripes to come across the street, you can imagine he was very excited. We were all excited,” Sahel recalled.

It only got better from there. He’s now able to see, recognize, grab, and count objects.

Mr. X’s eyesight is still far from perfect. He can’t perceive color, for example, and must wear the video camera goggles. But for him to be able to see at all after 20 long years must be a life-changing experience.

“This is the first reported case of partial functional recovery in a neurodegenerative disease after optogenetic therapy,” Sahel writes in his study.

He hopes that with further study, the same methods could help return sight to others who have been without vision for years.