Unless you’ve been living under a hefty rock in a sound-proof chamber seven miles underground, you know that there’s currently… Let’s say, friction in the US about law enforcement practices, as is evident in the soaring number of victims of the country’s criminal justice system.

Look, you know what we’re talking about. But that’s a whole can of worms that we’d just prefer not to open here. The whole thing is all over every single news channel, there’s nothing we can say that someone else hasn’t said better.

That being said, there was an interesting scene that played out in Florida in August. A Black man, who was briefly detained due to fitting a criminal’s description, was offered a job by police officers that held him.

Bet you didn’t think that was where this story was going.

And certainly neither did Joseph Griffin from Deltona, Florida, when he left his home for a jog. The military veteran and registered nurse thought his run would go pretty much like any other before it.

On the same day, however, a burglar had struck in Deltona, wrote CNN. The criminal had stolen a leaf blower/weed eater combo and taken off.

Why would anyone steal a leaf blower? Did the guy just have a really unkempt yard or something?

Back to the point, the cops in Deltona were on a lookout for a bearded Black man wearing a white tank top, black shorts. That’s when they spotted Griffin in his jogging getup.

He, of course, happened to match the description to a T. 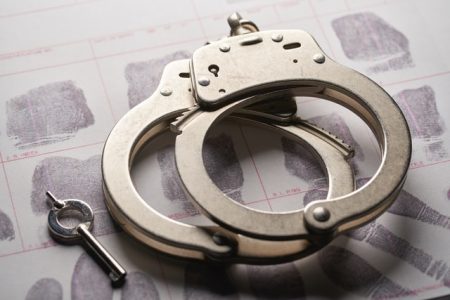 ‘You’re Not in Trouble’

The officer who went in to detain Griffin was wearing a body camera, as he should be. Thanks to that, we have the whole interaction between the two on video.

The video shows the officer calling out to Griffin and leaving his car.

“Hey buddy, you’re not in any trouble or anything. There’s a burglary that happened and you kind of fit the description,” the officer is heard saying.

He tells the officer that he has his ID with him, and the cop asks to see it to verify his identity. He also tells Griffin that his tank top, shorts, and beard match the suspect’s description.

After consulting with his higher ups, the officer proceeds to tell Griffin that he’s been instructed to detain him.

“Because you fit the description, and I’m not saying you’re guilty, but my sergeant’s telling me detain you. That’s my sergeant,” the officer says.

At this point, Griffin informs the officer that he is on a live video call with his two-year-old daughter. The cop asks Griffin for his phone so that he may put it down on the ground. Griffin complies.

Griffin is placed in handcuffs, while the officer is heard assuring him that he’s not under arrest. As more officers arrive on the scene, the cop picks Griffin’s phone up and puts him on the screen of the live call.

“If anything happens to me, you better raise hell,” Griffin briefly says.

Luckily, there was no reason for anyone to raise hell. The video shows Griffin beginning to chat with the officers while they wait for verification of his identity to go through.

“With everything going on, it’s just a little bit scary,” he notes to the cops.

Some 15 minutes later, the officers finally get confirmation that Griffin’s not the man they’re looking for. They release him from the cuffs, and the video shows one of the officers apologizing for the erroneous detainment.

Just minutes later, the video cuts to the body camera of a different officer, showing the arrest of the actual burglar.

Griffin, though shaken up by the experience, probably thought he was done dealing with the cops. But, as it turns out, he’s about to see them again.

When Sheriff Mike Chitwood viewed the body camera footage, he was impressed with what he saw, from both Griffin’s and the officers’ end.

“We knew we were going to get beat up, criticized a bit because there were several officers there. It never looks good. But then I was shown the body camera video,” Chitwood told CNN.

“I called Mr. Griffin, too, and thanked him for how he handled the situation. When you get stopped by police this is how to act. This really is a teachable moment. We can learn from each other.”

Since Griffin was a former military police officer, Chitwood asked Griffin to come in and give training to his staff in recognizing biases when conducting arrests. Through he was surprised by the offer, Griffin agreed.

Chitwood also offered him a job as a police officer, but Griffin turned that offer down. He already has a good thing going in healthcare.

But what did Griffin himself think of his detainment? Well, no one wants to get held by the cops, especially when they’ve done nothing, but overall he feels the whole thing went over smoothly.

“I did understand the fact they had to do their jobs, but nobody likes being put in cuffs,” he told CNN.

Griffin didn’t think he was stopped just because he is Black and understood that he fit a description.

Nonetheless, in a separate interview with Insider, Griffin called the detainment a “good interaction”.

“The officer did something that I definitely liked, he told me that he wasn’t going to let anything happen to me. And he kept my [Facebook] Live on,” he said.

“It’s a big opportunity that I think could help change the relationship between policing and the community, on both sides,” he concluded.