It’s no joke that fireworks can be dangerous, and that you have to be really safe with them. Otherwise, you could blow your hand off, kind of like this guy.

After attempting to shoot off a firework from the sunroof of his car, a 21-year-old man lost half of his hand. He had a mortar and was in Middle Tennessee according to the Murfreesboro Police Department.

The police said there was a woman with him that also sustained injuries after the explosion as well. The incident happened about 9:30PM on Wednesday near Forrest Drive and N. Highland Boulevard.

The Murfreesboro man said that the mortar exploded in the tube that he was holding in his left hand, according to the Rutherford County Emergency Medical Services. The area was searched in attempt to preserve parts of the man’s hand but the police couldn’t locate anything.

He was taken to Vanderbilt University Medical Center to be treated for his injuries. Paramedics were able to treat the 20-year old woman at the site.

She sustained burns to her neck and upper back, and also complained of ear pain. 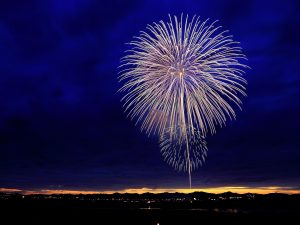 “Fireworks are made of explosives and are dangerous when used improperly,” said MPD Capt. Cary Gensemer. “Users should read the instructions and safety warnings. Bad things can happen, as was the case with this accident; a man’s life is changed forever.”

The Murfreesboro Fire Rescue Department  Chief Mark Foulks said the incident should serve as a reminder to never hold fireworks in your hand, and that you should always use a flat surface to light them.

Spokesman Larry Flowers said that as of Thursday, no arrest was made in connection to either of the incidents from Monday. According to the Murfreesboro fireworks rules, residents are n allowed to use fireworks in the city  limits of Murfreesborofirewo between July 3-5th and between the hours of 10 a.m. an 11 p.m.

You can only buy fireworks between June 28th-July 5th from state-approved retailers.

The National Fire Protection Association estimates that 19,500 fires were started by fireworks in the US. The fires caused 46 civilian injuries, five civilian deaths, and $105 million in property damage.