Sharks have been around for more than 420 million years. That’s a lot of time to spend on evolving, and as a result there are nearly 550 living shark species.

Some of them are well-known, like the great white, and everyone knows what your average shark looks like. But at the same time, the more obscure shark species start to look downright alien.

Here are seven of the most bizarre shark species still swimming somewhere in the oceans. 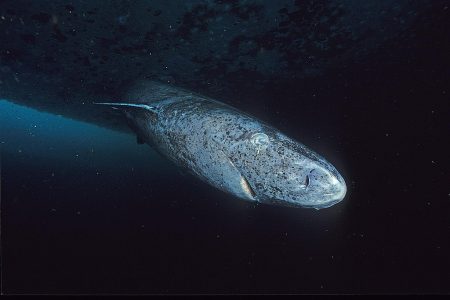 Let’s start from the more mundane-looking sharks. There’s nothing outwardly strange about the Greenland shark apart from its size – at an average of 21 feet long, it’s one of the largest living sharks.

But the Greenland shark starts getting weirder when you get under its skin. First of all, it lives in the Arctic ocean at depths up to 7,200 feet.

The temperature down there is near the freezing point, and the Greenland shark needs something to keep it warm. That’s why its flesh contains urea – a natural antifreeze – at concentrations that make it toxic to humans.

Maybe it’s because of that refrigerated environment that the Greenland shark lives ridiculously long. It’s the longest-living vertebrate in the world, with an estimated lifespan of anywhere from 250 to 500 years. 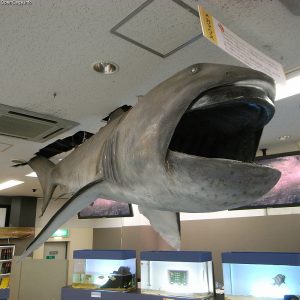 Megamouth sharks are big – only a couple of feet shorter than the Greenland shark. They’re also potentially one of the stupidest looking shark species ever.

What makes the megamouth shark look so ridiculous are the weird, thick… Suppose we can call them lips.

Scientists aren’t exactly sure what the purpose of the lips is. They guess the protuberances could either attract prey or help the sharks recognize each other. And that’s pretty much all we know about the megamouth since it’s so rarely seen. 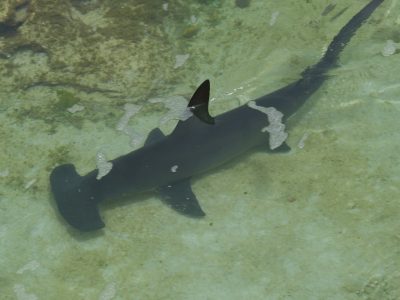 Everyone knows the hammerhead. But despite it not being a particularly obscure shark, you can’t deny that it looks really weird.

The characteristic wide head comes in many shapes and sizes, but in each case its purpose is to improve the shark’s vision. Hammerheads are actually able to see 360 degrees around them vertically, meaning they can see you whether you’re directly above or below them.

On top of that, the head houses organs that can detect electric fields created by living creatures. Essentially, the hammerhead’s head is a highly advanced set of sensory equipment, with a heavy emphasis of function over form.

The frilled shark looks like something that spawned directly out of your nightmares. These extremely rare, eel-like sharks get their name from the external gills that line their necks.

The frilled shark is often classified as a living fossil, and it’s one of the oldest still-living animals. It sports a good number of primitive features, like the aforementioned gill frills.

On top of that, the frilled shark has teeth like you’ve never seen before. They have 25 rows of multi-pronged, backwards-curving, trident-shaped teeth, totaling at roughly 300 teeth per shark.

And this roughly six-feet-long ancient monstrosity can swallow prey roughly half its size. Good thing it lives thousands of feet under the surface.

Here’s another very old shark, dating back some 125 million years. These pink fish like to hang around the sea floor at depths of 350 feet and up.

But that’s not the only weird thing about this creature. It can launch its jaws forward like tooth-filled party horn to snatch prey that just a moment before though it was a safe distance away.

Scientist speculate that the snatching jaws are an adaptation to make up for the goblin shark’s lousy swimming ability. So it’s not only ugly, but clumsy as well. 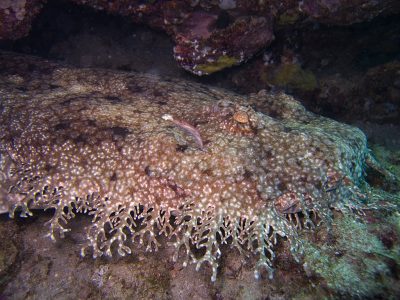 Ah, the wobbegongs – the shag carpets of the sea. That’s not an exaggeration, either, since this 12-member shark family is also known as “carpet sharks.”

The name comes from both their symmetrical coloring that resembles a carpet, and the weird weed-like whiskers or lobes that surround their jaws. These lobes contain sensory organs and also help the shark camouflage itself among rocks.

The wobbegongs live in warm, shallow tropical waters where they lie in wait to ambush hapless fish. They also occasionally attack humans, like scuba divers and surfers.

Sometimes the humans bite back, though. Australians serve wobbegongs as a variety of fish and chips, and their skins are used for making leather. 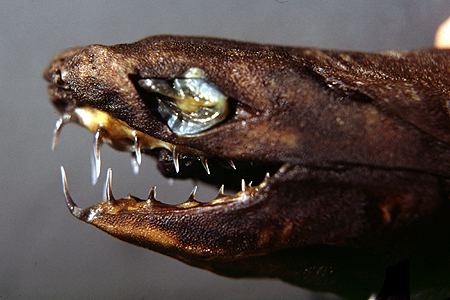 If you saw the viper dogfish, you probably wouldn’t even recognize it as a shark. These pitch-black, 18-inches-long fish lurk in deep depths, only rising up towards the surface at night to feed.

For what it lacks in length, the viper dogfish packs every inch as full of horror as it can. Its extendible jaws are full of protruding, needle-like teeth, and it can swallow fish that are nearly as big as the dogfish itself.

They are also bioluminescent, with light-emitting organs on their underside. Basically, the viper dogfish is a goblin shark on steroids, but condensed down to an eighth of its size.