But a Michigan man discovered quite the unusual treasure beneath his house. While tearing up the backdoor steps of his house, he found a bowling ball.

And then another. And another, and another…

By the time he decided to call it a day, David Olson, 33, had pulled out a grand total of 160 bowling balls. Apparently, some construction workers had decided to dispose of old bowling gear by using the balls as filler material.

A home improvement project has turned Olson into the lucky owner of dozens upon dozens of bowling. Now, only one question remains… What the heck is he going to do with them? 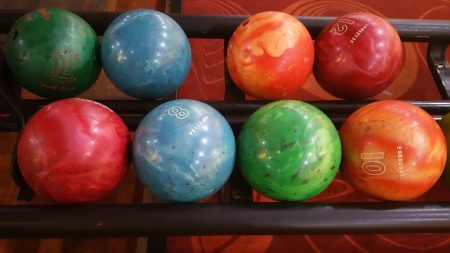 Olson made his discover on July 1. The man had decided the back of his house could use a facelift and he’d begun demolishing the old cinderblock stairs leading to his backdoor.

As he was tearing out the cinderblocks, something unusual caught his eye. In the darkness beneath the bricks, half-buried in sand, was a spherical shape.

“That was one of the bowling balls. I didn’t think a whole lot of it,” he told Detroit Free Press.

“I was kind of assuming maybe there were just a couple in there just to fill in,” said Olson.

But the more he worked, the more he realized that he’d been wrong. With every block and bucketful of sand he removed, Olson found more bowling balls.

“The deeper I got into it, the more I realized it was just basically an entire gridwork of them making up the weight in there,” he explained.

It wasn’t all bad, though. Olson said that he was actually kind of glad whoever built his house had resorted to using the bowling balls.

“It’s a little easier to roll bowling balls out of the way than to move the sand and figure out where to put all that,” Olson mused.

Olson didn’t have to think about where to put sand, but soon enough his yard had started filling with bowling balls. The man documented the progress of his excavation on his Facebook page.

“I had seen a few bowling balls through the openings but was totally shocked by the amount. I’ve counted at least 50 and see many more,” he wrote.

Olson labored on and updated his count a couple hours later at 2 p.m. By that point, the number of balls had grown to 120.

At 3:19 p.m., Olson decided he’d had enough to dragging the balls out into daylight. His final count of the day – 158 bowling balls.

“I am done for the day and have reached the depth I was going for, and still feel more balls under the earth,” Olson wrote.

“I’m not sure if I should remove any more as the entire patio may contain them and I do not have the time or energy for such an excavation.”

Since the last Facebook update on the situation, Olson has pulled out a few balls more. His total is now at 160 and counting.

Once his day’s work was done, Olson’s yard was chock-full of bowling balls. That’s when a thought occurred to them.

Olson is a family man and has three young children. The bowling balls were obviously old, and he wondered whether they could’ve been made out of potentially hazardous materials.

He scrubbed a couple of the balls and discovered the manufacturer’s name – Brunswick Bowling Products. Since the company was still in operation, Olson contacted them in hopes of getting confirmation whether the balls were safe.

After about a day, Olson received a reply. Brunswick requested pictures of the balls serial numbers so they could compare them against their archives and give Olson a definite answer.

The company did some spelunking and discovered the balls were manufactured at various times during the 1950s. They also shed further light on how the balls ended up under Olson’s stairs.

Back in the day, construction workers would pick up scrapped bowling balls to use as a cheaper alternative to gravel or sand when filling house structure. The good news was that they contained no dangerous chemicals and could be disposed of safely.

Good Use for Balls

But how do you dispose of 160 bowling balls? Clearly that had already been tried in the past, but Olson wasn’t about to shove them back under his house.

The obvious answer might be to clean the balls up and use them for their original purpose. Unfortunately, the balls might not make it back to the bowling alley.

According to Olson, many of them are in very rough shape and would require extensive restoration. Additionally, someone has cut two spiral grooves into each of the balls, rendering them useless for bowling.

Nonetheless, Olson is planning to put the balls to good use. He’s donated eight of them to a local church for use in a bowling ball cannon.

Olson’s stepfather is also set to receive some balls, and plans to turn them into custom furniture. But Olson plans to keep most of balls for himself to make sculptures and edging for his property.

He’s also started a GoFundMe page to finance the complete excavation of his patio and discover how many balls are still lurking under it. On the page he explains that he originally stopped short because he wasn’t planning on replacing the entire patio.