The old adage that two heads are better than one may not actually be on the money. Because while it makes sense when trying to solve a problem or complete a project, actually having a pair of noggins is a scientific anomaly that is guaranteed to give you looks. And you’d better believe you’re gonna see them — you’ve got two heads, so you’re bound to be more aware of what’s going on around you.

Strangely, the animal kingdom has produced a surprising number of creatures with two heads. And it’s not just one type of animal, either. There’s a wide range of beasts that entered the world with not one, but two craniums. Is it double trouble? Take a look for yourself to decide.

This dead porpoise was spotted by some Dutch fishermen, who tossed it back into the water, unaware it was the first known instance of dicephalic parapagus—that’s partial twinning—in harbor porpoises. It’s also only the fourth known case among cetaceans. and tenth conjoined twinning among the cetacean species.

Scientists think the porpoises died shortly after birth. The matter was such an oddity that a paper was published about it. Whether or not it can shed any light about conjoined twins remains a mystery.

Snakes are terrifying enough of as it is. Do we really need to think about the fact there’s one with two heads slithering around? Yet that’s exactly the reality in China when someone came across this two-headed baby cobra that experts believe had already been alive for 10 days when discovered.

And let’s ramp up the creepiness factor, shall we? Each had had its own brain, enabling them to move on their own. Yeah, one snake veering off in two direction. Good luck sleeping tonight.

We’ve got to, ahem, milk this list for all it’s worth, so, naturally we have to include a cow. This cow was born in a village in Morocco and named Sana Saida — that’s Arabic for “Happy New Year.” Aww, how moo-ving. Sorry, we couldn’t resist.

Amazingly, two-headed cows are not that uncommon. Just ask this one from Florida. Or this one from Kentucky. Or this stillborn one — with eight legs — from Chile.

A gecko is the Geico spokesman, err, spokescreature, which is probably the only thing you know about this creature. Well, now you know two things, the other being that there is a geico with dual noggins out there.

Three men stumbled across this reptile in an apartment in Thailand. The little fella was such a newborn that it still had some egg shell on one of the heads. “This is very unusual,” said a local biology professor. “House geckos usually live about one year, but I’m not sure about this one because it’s deformed. The owners could try feeding it with black ants, which will not sting the gecko, or with mealworms.” Mmm, yummy. 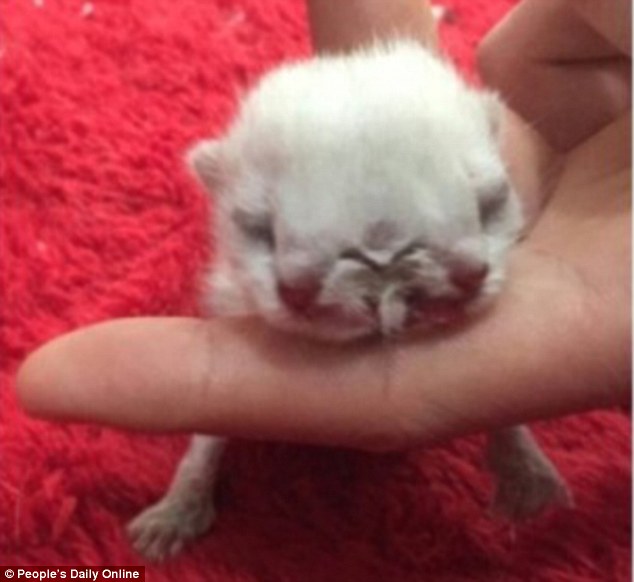 This is purr-featly unique. A cat with two heads and three eyes was born in China, defying one-in-a-million odds.

The owner of the cat, who believes the feline is blind, said while both mouths are mobile only one makes sound and drinks milk, while the other uses its tongue to clean itself.

And, like cows, multi-headed cats do pop up from time to time. Remember Frankenlouie, who somehow lived to the ripe old age of 15?

While his contemporaries may have gone to the market or all the way home, this little piggy probably should’ve gone to the doctor. That’s because he stunned farmers in China by being born with two heads and three eyes. The farmers were worried the swine would not live long because of its condition.

Maybe there’s something in the water in China. Shortly before this pig’s birth, another pig with two bodies and eight legs died in the country.

A two-headed dog, you say? What makes that unlikely animal an even more unlikely story are the circumstances under which it happened. In some sort of Dr. Moreau-type experiment, Russian surgeon Vladimir Demikhov managed to attach the heads of two dogs onto one body.

It’s all very confusing, but the long and short of it is Demikhov severed the spine of one smaller and removed its body under the ribs. He then cut into the next of the bigger dog and tied the blood vessels of both animals together, while somehow maintaining the heart, lungs and front paws of the little dog.

Demikhov worked tirelessly on dogs over the years, even performing lung and heart transplants on canines. It’s kind of disturbing, but his work was not ignored.

Christiaan Neethling Barnard, a cardiac surgeon who performed the world’s first successful human-to-human heart transplant, once said, “I have always maintained that if there is a father of heart and lung transplantation then Demikhov certainly deserves this title”.

This lamb was euthanized shortly after its birth on a farm in Wales, amidst fears of the Schmallenberg virus that had been plaguing the region, so, sadly, this animal didn’t have much of a chance and no one did any research to see what exactly caused the deformity. 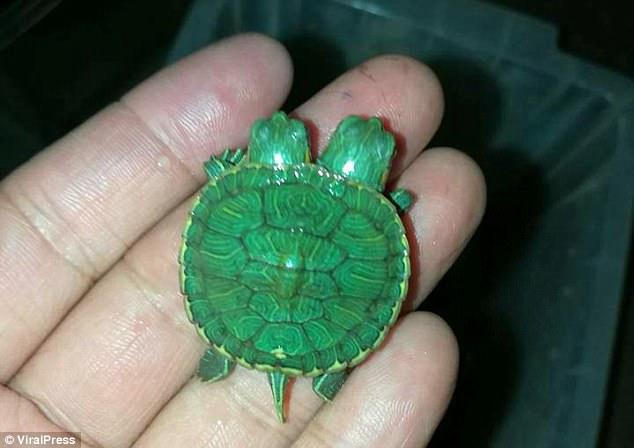 A turtle with tandem craniums was born in Thailand and in a nod — with both heads, presumably — to “Teenage Mutant Ninja Turtles,” it was named Michelangelo and follows the two-headed turtle the made waves in Florida.

“’I breed turtles to sell and a lot of people have been interested in this but I think we might keep him as he is very special’, said the turtle’s breeder.

Turtles with two heads are about as rare as a turtle that moves slowly. Just go to YouTube and search “turtle two heads.” There’s a lot there.

There’s a rumor that cockroaches can live without their heads, which makes this the ultimate in irony.

There’s very little context, but this video, which states it features a “mutant South African roach,” would indicate this cockroach has two heads and incite twice the panic for the poor person living in a dilapidated apartment who finds him scurrying around the kitchen.

A woman in Northampton, Mass. got the surprise of her life when she discovered a baby cardinal with two heads and three beaks outside her home. Hmm, you’d think if any bird had two heads, it’d be a TWO-can, right?

An adult cardinal fed the bird, but officials believed the baby was doomed to a short life.