We all have seen animals do strange things. But we have not all seen an alligator climb a fence.

They can climb fences though, in case you didn’t know.

A Florida television station posted a video of an alligator climbing over a fence at Naval Air Station Jacksonville. The video came from Christina Stewart.

After the climb, the gator landed on the other side of the fence, and strolled away. Naval Air Station Jacksonville didn’t seem to mind the alligator too much. “If you are new to Florida or have been here for years, when you see water, assume an alligator could be in it,” the installation posted on Facebook.

“We have several on the base and they don’t respect our security measures. On the serious side, always be aware with small children and pets. Golfers be aware and watch where you stick your hands. Do not approach them ever!” 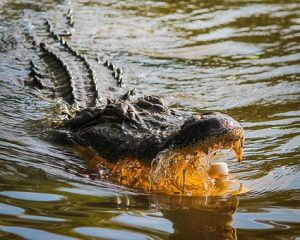 “They generally try to go under fences, but in a mad scramble, when trying to get over something, they can get over a fence or wall,” retired trapper Gator Bill Robb told the newspaper, which is part of the USA TODAY Network.

This video was just the latest sighting of odd news regarding an alligator. Earlier this summer, the city of Chicago spent more than $33,000 trying to catch an alligator.

They even named the gator, Chance the Snapper. The alligator was in a Chicago lagoon. And there was another alligator recently spotted in Michigan.

This NAS video went viral and has been viewed over 1.3 million times. Odd alligators and odd news seem to go hand in hand these days.