Deion Broxton, a KTVM reporter, was preparing for a live report when he noticed the bison approaching both him and his vehicle. He was in Yellowstone Park at the time.

Turns out it wasn’t just one either, nope. A while herd of bison was walking right towards him. As they got closer then he wanted them too, Broxton bailed and stashed his camera in his car.

Once he was far enough away, he began to shot a video of the bison. Even just seeing the video was intimidating, the bison were huge.

Broxton’s reaction was so funny and of course, typical in these days, it became a meme, that people use when they are not happy with a situation. Yellowstone Park officials did eventually see the video as well.

Broxton has been praised by the park officials for demonstrating “a perfect example of what to do when approached by wildlife!” There was even a handy graphic used by the National Park Services to remind people to use social distancing when it came to wild animals. 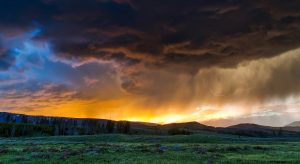 “Social distancing means avoiding large gatherings and maintaining distance (6 ft) from others. While we’re at it, remember to keep it at least 300 ft for larger wildlife,” NPS wrote.

This is especially true with bison, as they have been known to charge people, provoked or not. However, at the same time, attacks by this animal are not all that common. Yellowstone officials say that they see this type of thing happen but once or twice a year.

But for now, Yellowstone, like so many of our favorite places, will remain closed to visitors until further notice due to the Coronavirus pandemic.