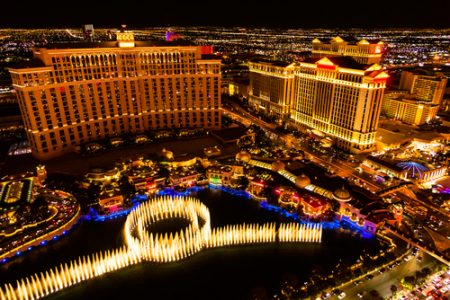 What is it about casinos that draw in the weirdest and wonderful folks in the world? Places like Las Vegas are a magnet for bizarre people and bizarre things, and anyone who goes there usually comes back with a tale or two. However, it’s not just Vegas, the entire casino industry has lots of weird little facts and history attached to it. Below, we highlight eight facts that are weird, fun and interesting:

Zen is better than Confusion

You know those people who like to tell you that casinos use mind tricks – no clocks, oxygen, confusing maze-like layouts – to make you gamble more. That’s old hat these days. Casinos are now all about making you feel wonderful. If you notice all the ornate beautiful flower and garden displays in places like the Wynn and Bellagio, it’s because a calming, comfortable atmosphere makes you spend more. Moreover, being surrounding by luxurious things, makes you want luxurious things. Simple psychology.

FedEx Owes its Existence to a Casino Game

FedEx had around $65 billion in revenue last year, but things weren’t going so well in the 1970s. Down to its last $5,000, CEO Fred Smith headed to Vegas and earned around $27,000, enough to keep the company above water until new contracts rolled in. Note to business owners: this is a very risky strategy, and we wouldn’t advise it!

Prison wardens can be a tough bunch at times, but what was going through the mind of the management of Nevada State Prison, which had a casino between 1932 and 1967? It even had sports betting. There was nothing like that in Shawshank Redemption, eh?

Good ol’ USA, where everything is bigger and better. Nope. When we played on the casino.com live roulette platform, we were able to confirm something – European roulette is better. There is no difference between the two games, except European roulette has better odds (it has to do with the extra pocket on the American wheel). You’ll need to be really, really, really patriotic to choose American after knowing the difference between the two variations.

Monaco: playground of the super-rich and famous for its Casino de Monte Carlo. Sounds great, except local people aren’t allowed to gamble due to the laws of the principality, which hint that the casino industry there was designed for the global elite. However, we are willing to bet that the really rich residents of Monaco wouldn’t be denied entry to the casino.

Ever hear the saying the house always wins? Why do they say “house”? It’s because of the etymology of casino, which comes from the Latin/Italian root – casa. You should be very careful about the spelling however, as casinò means casino in Italian, and when casino loses that all-important grave accent, it becomes a slang term for brothel.

How do you market your casino? Well, how about tying in your games with a bit of nuclear bomb testing? That’s exactly what happened in the 1950s, with Vegas casino bosses trying to attract people with parties themed on atomic testing, and scheduled viewings of the explosions. Lovely.

The world’s smallest casino was said to be in the back of London taxi. Operated by the Grosvenor Casino, it had everything – croupier, bar, choice of games. Quite why anybody would want to play casino games in the back of a cramped car is beyond us. Then again, Londoners are strange folk.