Earlier this week we took a look a the most bizarre living sharks. Sharks have been around for more than 400 million years, though, and some species have kicked the bucket.

To continue our Shark Week celebration, here are seven extinct sharks and more or less shark-related marine predators that once lurked in the world’s oceans. And like many other ancient life forms, they’re a weird bunch.

Helicoprion is an extinct genus of sharks that, granted, weren’t the largest or the most ferocious beasts of the sea. But they’re just so wonderfully weird.

Instead of normal shark jaws, Helicoprion had what’s known as a “tooth whorl.” Its teeth were arranged in a spiral that was somehow attached to its lower jaw.

There have been probably dozens of studies and guesses about how Helicoprion’s jaws worked. The suggestions range from reasonable to downright ridiculous.

Today, the scientific consensus is that the tooth whorl was embedded inside the shark’s lower jaw. Helicoprion used it to catch hard-shelled cephalopods, like ammonites and nautiluses. 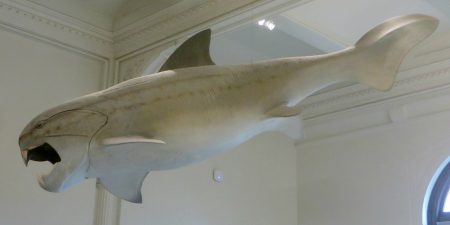 Dunkleosteus is not a shark, but it is a fish. In fact, it’s one of the earliest fishy apex predators, having lived some 380 million years ago.

Sharks already existed when Dunkleosteus was swimming around, but they weren’t the biggest, baddest things in the sea yet. And that’s because Dunkleosteus kept them in their place.

These fish could grow to be nearly 30 feet long and weigh more than four tons. Their head and neck were covered in thick armor plates, but they weren’t there for protection – their purpose was to provide an anchoring point for Dunkleosteus’ ridiculous jaw muscles.

Sharks didn’t start climbing up in the food chain until fish like Dunkleosteus went extinct. Yes, this is the thing that sharks see in their nightmares.

Shastasaurus is the largest known marine reptile to have ever lived. Some Shastasaurus species could reach a length of 70 feet.

But if you think that enormous size translated to being a ferocious predator, you’d be wrong. To begin with, it didn’t even have teeth.

Researchers believe the Shastasaurus preyed almost entirely on squid. It could open its jaws so wide and so fast that the unsuspecting squid would be vacuumed into its mouth.

The Shastasaurus essentially swam around and occasionally opened its mouth to suck up a squid. We probably found the least intimidating predator on this list.

Like Helocoprion, Edestus had some weird jaws. It’s not called the Scissor Tooth Shark for nothing.

Instead of a weird spiral, Edestus had one row of serrated teeth on each jaw. But instead of the usual configuration, the rows of teeth extended forward from its skull – like the blades of scissors.

How this 21-feet-long shark ate anything with that kind of a tooth setup is anyone’s guess. We have even less of an idea of its feeding habits than we do of Helicoprion’s.

One thing is certain, though. Whatever Edestus preyed on would have a seriously bad time if it got caught in the scissors.

If you ran into a Prychodus while scuba diving, you might think it’s a game over. At 33 feet long, the Ptychodus is roughly twice as big as a great white.

Lucky for you, though, the shark most likely wouldn’t give a hoot or a holler about you. Ptychodus is a weird shark in that it ate exclusively mollusks.

Instead the usual sharp, serrated shark teeth, Ptychodus’ dentistry resembled two crushing plates. It would grab huge ancient clams and crustaceans in its mouth and crack their shells between the teeth plates.

Still, this thing was huge. It’d be probably be best not to try handfeed one in case you end up back in time in the deep sea.

Because that’s clearly what anyone would do in that situation.

Despite its name and marine-reptilian appearance, Basilosaurus is actually a whale. When its remains were originally discovered, people thought is was a reptile and the saurus naming stuck.

You can’t really blame the scientists of old, though. Basilosaurus doesn’t look like anything you’d think of as a whale, but its unusual body structure was very effective for its lifestyle.

Basilosaurus is one of largest actively predatory whales to ever exist. It’s even bigger than the modern sperm whale.

And what did it eat? Pretty much anything it pleased – Basilosaurus gobbled up other whales, sea turtles, ancient elephants, and sharks.

What, did you think you could have a list of ancient sharks without Megalodon? How could we not include the biggest shark to ever live on here?

Since sharks’ only bones are in their jaws, they don’t leave behind a skeleton when they die. Because of this, we aren’t quite sure of how big the Megalodon got.

Estimates based on the size of its jaws range up to 67 feet in length. Even more conservative estimates put Megalodon at around 35 feet.

With teeth the size of your palm, there wasn’t much in the ocean the Megalodon couldn’t eat, except maybe the largest whales of the time. Those whales are probably also the reason Megalodon went extinct – the average whale just got too big for it to eat.