That’s the way it’s always been and will probably always be. All through history, we’ve put on the most outlandish outfits to seem richer and more stylish than we might actually be.

We’ve covered the strange fads and fashions from both history and modern times before. But people have come up with so many mind-boggling trends that it’s worth revisiting the topic every now and then, don’t you think?

Here are six more bizarre things that were once the peak of high fashion — and some of which probably killed more than a few people.

“What the **** is a crinoline?” you ask. These contraptions have long since fallen by wayside of the fashion industry and for a good reason.

A crinoline is an underskirt meant to prop up and give more shape to a lighter overskirt. They developed from petticoats made of cloth and by the mid-19th century, they had become cage crinolines made of horsehair, wood strips, or even metal.

The crinolines were popular because they allowed women to walk more freely with their heavy skirts. But that idea went out the window when the crinoline’s started growing to ridiculous sizes.

The worst part of them, though, was that they could be deadly. Crinolines made of flammable materials regularly caught on fire when the woman accidentally backed her giant skirt into the fireplace.

They could also get caught in the wheels of machinery or passing carriages. Additionally, a stiff breeze could catch the crinoline and fling a woman off a cliff. 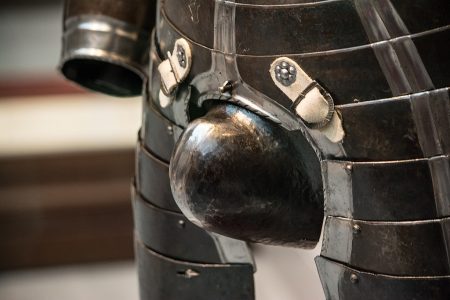 Men have always wanted to emphasize just how manly they really are. In the late Middle Ages and early Renaissance, this desire reached its logical peak.

The guys started stuffing their pants.

You’re familiar with the codpiece, surely. It’s a piece of padded cloth or even metal worn at a man’s crotch with the goal of emphasizing the masculine bulge in his pants.

Like the crinolines, the codpiece eventually grew to enormous sizes. That was also their downfall, as people started wondering what the aristocrats were compensating for.

You ever wondered why it’s called a “codpiece,” by the way? Well, “cod” was English slang for “scrotum” at the time. 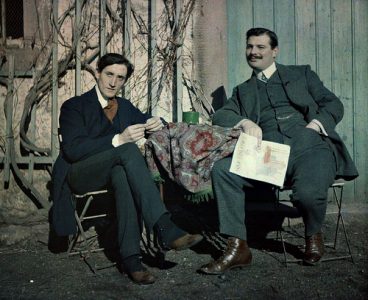 Alright, people are now laughing at your codpiece. That’s okay — you can emphasize your masculinity with a stupidly tall and stiff starched collar.

These detachable collars from the 19th century were starched to the point that they were practically solid, unbendable pieces of fabric. And they were lethal.

Let’s say a man got a bit tipsy and passed out still in his dress shirt. If he fell asleep in the wrong position, the collar could slowly asphyxiate him.

But the collars also led to more gruesome deaths, at least on one occasion. A man from St. Lois tripped on the street and the stiff, pointed corners of his collar sliced his throat open.

No wonder these things were called “father killers.” 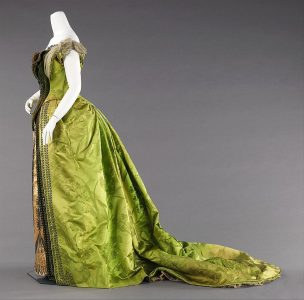 In the Victorian era, a vivid green color — like that of some glass bottles — was the most fashionable color for a lady’s dress. But how did they dye fabric to that specific color?

They used arsenic. Lots and lots of arsenic.

If you somehow have never heard of arsenic, it’s one of the most famous poisons in history. And these dresses were toxic as all hell.

Wearing one for even a short period of time could cause the lady to suffer from nausea, blurred vision, unconsciousness, or skin reactions. The only upside is that the expensive arsenic dresses were only used for the most special occasions.

But the ones who had it worst were the tailors making the dresses. It’s a well-documented fact that many tailors died from arsenic poisoning serving their rich customers.

The popular image of a Victorian woman is an uptight, prim, and proper lady. But under the petticoats, corsets, and arsenic dresses, the ladies indulged in a kinkier fashion trend.

For about 20 years at the turn of the 19th and 20th centuries, Victorian ladies were all about nipple piercings. The fad started in Paris, spread to the rest of France, and soon enough the women of England were asking jewelers to stick needles through their nipples as well.

They weren’t just little studs, either. It was common for women to sport a gold ring on both nipples — sometimes connected with a chain.

How shall we put this? They thought nipple piercing would give the lady more junk in her trunk.

Don’t ask us how that would work. It didn’t, and pierced nipply bits were out of fashion by the 1910s. 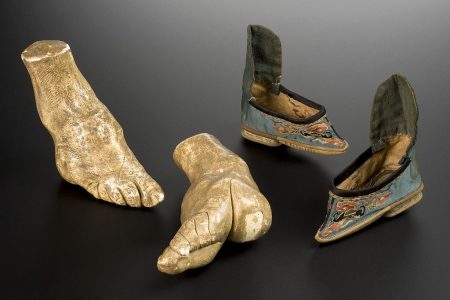 They say you have to suffer for fashion. If that’s true, then Chinese women were the most fashionable of all.

Foot binding is one of the most gruesome and torturous fashion trends of all time. It involved shrinking a woman’s foot into a hoof-like shape, essentially breaking and re-molding her bones.

The foot binding treatment was started when girls were children and their bones still malleable. After soaking their feet in vinegar and urine (for some reason), their toes were tucked tightly under their foot and wrapped in restricting bandages.

Over the years, the foot would deform into its new shape. With that came all kinds of wonderful complications, like chronic pain, difficulty walking, skin conditions, and even gangrene.

Yet the custom persisted well into the 20th century. And some of its most vehement defenders were women themselves.