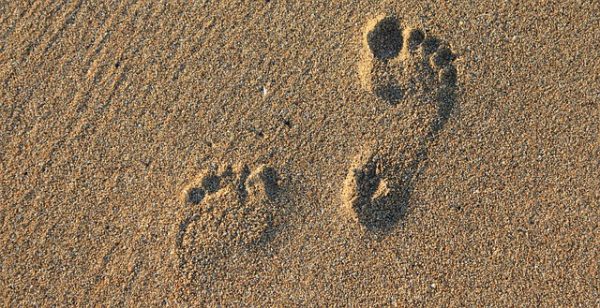 A dairy farmer stepped out on the patio to take a leak. Off in the distance, he noticed a figure around 6′ tall, covered in black hair. It jumped two wire fences without touching them. The dairy farmer compared the leaps to that worthy of an Olympic athlete.

The next evening another farmer witnessed a similar black figure. The farmer noted the way it walked, calmly, stopping and starting again as he headed towards the mountains.

Quines, Argentina’s Environmental Police commissar and head of Unit Number 5, Marcelo Diaz has quite the hunt on his hands.

At first, they assumed it was a gorilla or a monkey. Though how a gorilla would’ve made it to the area without being noticed is a puzzle. There are gorillas in the Amazon, but they’re clear across the country. Private zoos aren’t uncommon, but not every animal is legal to keep. None of the monkies anyone can think of match the footprints found.

In fact, no animals come close – except humans. The differing characteristics between these footprints and human footprints? The size. Díaz explained that they found tracks in a smooth area and others in the bush. “They are similar to those of a human foot but we discard that they are of a person by the great size”, intrigued the policeman in charge of the operation.

On the 22nd of March, ten officers and five experts looked for the strange figure towards the mountains. One of the farmers who first saw the figure joined them. He heard a noise behind them and when they investigated the area they discovered the tracks.

Five policemen and three experts plan to follow the footprints found towards Banda Este, a suburban area. The commissioner explained that they will search at night. The reports were all during the evening hours. They will be using night vision devices that will also record.

No one can agree on what has been seen, but rumors suggest a bigfoot, a yeti, a sasquatch. While some residents of the area ridicule and tease the witnesses of the strange creature, some can’t rule out that it might be some other kind of primate. Residents worry that if the reports are true, a gorilla or something of similar size could present a danger to the community and it’s children.