After police and fire crews were called to a vehicle fire around 3:37 p.m. last Saturday, a woman was taken into custody. She had lit the car on fire, and all because it was dirty.

The vehicle was parked in a Walmart parking lot and was surrounded by other vehicles, according to the report. Police did speak with Stephanie Carlson, 40, who was inside of the store.

At first, she told a different story, before then telling the truth. The police that spoke with her said that she was “acting strange” and that her clothing smelled of gasoline.

She originally said that there was gasoline in the back of the car, and that the fire had started after she lit a candle to get the smell of gas out of the car. She then told police that she left the car and went into the Walmart because vibrations from sitting on the fire truck made her feel like she needed to use the restroom. 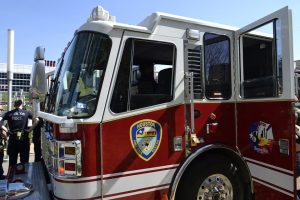 Later, Carlson reported that she poured gas on the seats and set the car on fire with a lighter because the car was dirty and had a messed up front wheel. Police were able to watch footage of what really happened at the scene.

The video showed Carlson setting the car on fire before running away. There was black smoke billowing from the car.

The report stated that the vehicle didn’t even belong to Carlson. The car actually belonged to her husband.

Her husband says that he had been looking for his wife ‘all day’ prior to the incident. When all was said and done, Carlson was charged with arson, inducing panic, and criminal damaging.

There were no injuries reported in this case, but there was damage left to the area in the parking lot where the car had been.

The suspect was recently using drugs, according to what the husband shared with investigators. She was reportedly breathing paint thinners and ingesting mothballs, which include pesticides used to kill bugs, that have been used by people to experience a high.