It turns out the woman didn’t sustain any injuries, so that’s good. But being on Snapchat in the car and falling out because of it, really?

In Surrey England on Saturday, police shared on Twitter that an unnamed person was “hanging out the car whilst filming a Snapchat video.” The car was driving down M25, south of London, when the incident occurred. Police wrote that the passenger, “fell out the car into a live lane.”

“It is only by luck she wasn’t seriously injured or killed,” the Roads Policing Unit added. 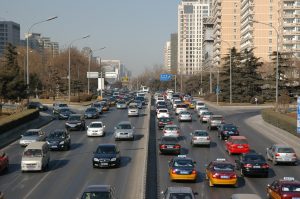 They also included a picture of the passenger window where the woman had fallen from with the hashtag “#nowords.”

Users asked police if the woman had been arrested or not and you may be surprised at the answer. According to the Surrey Police, there was “no necessity to arrest.”

“We can’t just arrest people for fun. We have to have a necessity which we did not have for this. We knew who she was, where she lived, there will have been plenty of evidence and no person or property was likely to be at any further risk,” authorities replied.

Even without an arrest, police hope that others will learn from the incident.

“But I suspect not many people are sat there thinking this sort of thing is a good idea and those involved certainly learnt a thing or two that night,” the police added.

When asked if the police ever told passengers of the “errors of their ways,” they responded with, “Every chance they worked it out before we spoke to them about it!” Statistics shows that 259 people around the world died between 2011-2017 while taking selfies.

Just last year a 23-year-old woman was a hit-and-run victim due to flying out a car window after yelling, “Bye, Miami,” From the right rear passenger window. The woman was struck by a Range Rover whose driver did initially stop and pull over, but then left the scene completely.