Animals are rejoicing with us staying inside more than ever. And most of us are pretty happy for them.

This worldwide pandemic has forced many of us inside more than ever but this has given the Earth the chance to heal, grow, and its first inhabitant’s, the chance to be left the Hell alone. Because you know, humans.

We’ve seen a lion pride laying right in the middle of the street in South Africa and black bears roaming parts of Yosemite that they haven’t in years. And now, a large pod of Indo-Pacific humpback dolphins have returned to the waters between Hong Kong and Macau.

The dolphins, Chinese white dolphins and pink dolphins, have come back now that the large number of speedboats have “moved out.”

“I’ve been studying these dolphins since 1993 and I’ve never seen anything like this dramatic change before, and the only thing that changed is 200 ferries stopped traveling,” Dr. Lindsay Porter, a senior research scientist with the University of St Andrews, said.

Porter says that dolphin numbers have risen 30% in the waterway since March. 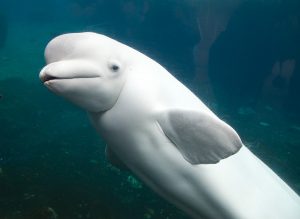 “From visual observations, the dolphins are spending much more time socializing, splashing around on the surface, quite a bit of foreplay, quite a bit of sex,” she added. “Hong Kong dolphins normally live on the edges, they’re stressed, they spend their time eating and resting. So to see them playing, to see them having a good time, that was really great to see.”

Porter and her team tracked the amount of dolphins that came back using underwater recording stations just under the surface in typical ferry lanes. Then they listened in to hear the dolphin vocalizations and compared the new recordings to the prepandemic recordings.

The team hopes that the findings will help change the way the ferry companies operate in the water to help ensure that the dolphins stay.

“I sometimes feel that we’re studying the slow demise of this population, which can be really sad,” Porter has said.

The dolphin population in the Pearl River Estuary is around 2,500 according to the World Wildlife Fund Hong Kong. But there has been a “worrisome decrease” in recent years, and at the end of the day, we, the people, need to jump into action to save these animals.