Do you know where dumplings originate? What about cheeseburgers? Here are a bunch of your favorite foods and where they’re from, because, who doesn’t want to talk about food? 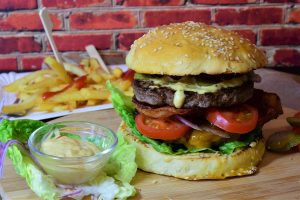 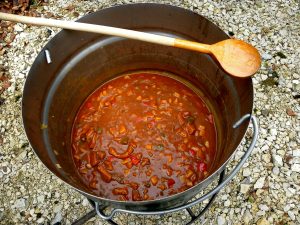 Goulash comes from Hungary and is actually a soup of meat and vegetables, typically seasoned with paprika and other spices. Goulash is a typical Central European dish and is one of the national dishes of Hungary and a symbol of the country. This meal originates from 9th century stews eaten by Hungarian shepherds. The meat was cooked, flavored, and dried in the sun, then packed into bags made of sheep’s stomachs. It was the first of boxed dinners if you will, and all you had to do was add water to finish off the meal. The first versions of goulash didn’t have paprika in them, as it wasn’t introduced until the 16th century. It depends on where you are, but American Goulash is typically simple with crumbled beef, tomatoes, tomato soup/paste, elbow noodles, and some seasonings. In Hungary, there are so many varieties, some omitting potatoes and adding sour cream and sauerkraut, others omitting the pasta and adding vegetables,  and some even substituting beef bones for meat and add vegetables. Another recipe omits potatoes and caraway seeds and swaps for kidney beans, or uses smoked beef or pork for the meat. 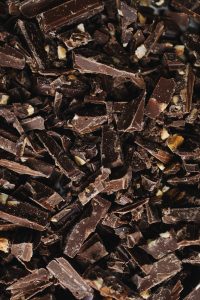 And at last, a cake that has German in the name, but is not from Germany. Yup, that’s right, German Chocolate Cake is from the United States. It was originally called German’s Chocolate Cake and is traditionally a layered chocolate cake filled and topped with coconut-pecan frosting. Chocolate maker Samuel German developed the formulation of dark baking chocolate in 1852, but the cake didn’t come to be until over 100 years later. “German’s Chocolate Cake” was the “Recipe of the Day,” on June 3rd, 1957, in The Dallas Morning News. Mrs. George Clay submitted the recipe. The possessive form (German’s) was dropped in other publications, leading to the name “German Chocolate Cake,”and also leading to the false identity and impression of a German heritage. 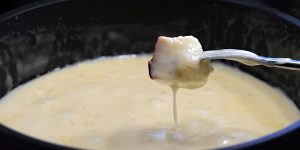 Fondue is a melted cheese dish, served family style, over a portable stove or hot plate of some sort. You eat it using long-stemmed forks to pierce bread pieces and then dip them into the cheese sauce. Fondue has been universally used as a term for a communal pot of liquid, in a fondue pot, from chocolate to broth. The earliest fondue cheese recipe originated from Switzerland in a 1699 book and calls for cheese to be melted with wine and to use bread for dipping. Not to be confused with “cheese fondue” which was an eggs and cheese dish, something between scrambled eggs with cheese and cheese soufflé. Mix cheese, wine, and some seasonings, cut up some bread (or meats and vegetables) for dipping, and there you have it, fondue. Is this one of your favorite foods?

German Chocolate Cake, as it’s now called, doesn’t even come from Germany. Who knew? Watch for part two, so that you can see where all the rest of your favorites come from.