Literally translated, ‘roulette’ means ‘little wheel,’ and the game is known to have originated in 17th-century France. However, despite Blaise Pascal taking credit for the popular game, there is some evidence to suggest that it dates back much further than previously thought. 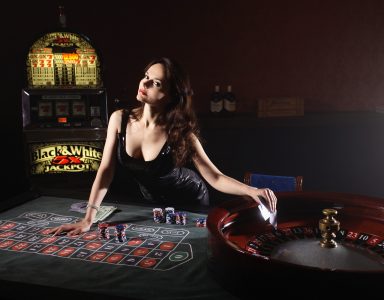 This post will investigate further into where roulette came from, and how we got to the fun, interactive game that it is today.

One suggestion is that roulette came from ancient China.

Dominican monks discovered a board game that required players to arrange animal figurines into a square, with numbers totaling 666 (the same as the modern-day roulette wheel). The game was supposedly then brought to Europe but with modifications: the square became a circle and there was an additional slot added to the game for zero (0).

To combat the anguish and low morale suffered by Roman soldiers, commanders attempted to make life a little more fun by creating games for everyone to play. Using what they had to hand, many of the games involved spinning a chariot wheel or shield—similar to the way roulette is played today.

Similarly, the Ancient Greeks divided their time between dodging arrows and creating games for one another. Different symbols were drawn onto a shield which was then spun. Next to the shield, an arrow would be placed so that when the shield stopped spinning, a symbol would stop next to the arrow. Soldiers could guess which symbol would be the one to win, which has huge similarities to the modern game.

Unfortunately, there isn’t enough physical or written evidence to prove that either the Romans or Greeks officially came up with the game, but it is interesting to see just how familiar these made-up games sound.

Of course, the game is French named, but there’s also much more evidence to suggest that the game did, in fact, originate here. In the 17th century, two other popular games (Roly Poly and Even-Odd) are known to have been combined to create the roulette wheel. These games involved betting on different outcomes, so it’s easy to see the link.

Due to royal money issues in Monaco, the prince chose to open several gambling houses, which turned this simple game into a favorite pastime for the royals and the upper echelons of society. The game that was played in these gambling houses is the most similar to the modern game; the wheel is labeled with numbers 1 to 36, with red and black colors, and a zero pocket.

Despite taking several years to become popular, roulette is now played across the globe both in casinos and online. You can now play lightning roulette, as well as other themed games on sites across the web, or enjoy the thrill of the game in real life in Vegas. Games like these are quick, convenient, and fun, making it perfect for passing time (like the Romans and the Greeks did) or hosting your own elegant casino night (like the Prince of Monaco).

Where the game originated will always be shrouded in mystery, but one fact is certain: it isn’t going anywhere anytime soon.