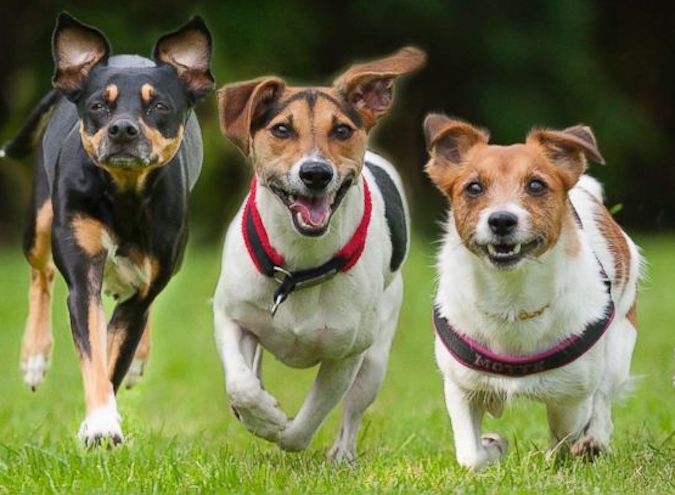 Man’s best friend is more than just a tail-wagging, Frisbee-catching, toilet water-guzzling collection of fur that jumps for joy every time you pull off that amazing trick by coming home each day.

Dogs are complex creatures that serve as pets, sniff out drugs and ride shotgun on fire trucks. They’re part of the fabric of society and while there’s a lot we know about dogs, there’s plenty about them that remains a mystery as deep as why they continue to try and chew peanut butter.

So, sit back, crack open some Milk-Bones and enjoy these fun facts about dogs, our four-legged friends.

Age Is More Than Just a Number

According to Guinness, the world’s oldest dog lived in Australia to the ripe age of 29 – that’s over 200 in human years — before dying in 1939. However, that record was challenged in 2016 when the owner of a sheepdog, also in Australia, claimed his pet died at the age of 30. Unfortunately, he didn’t have the paperwork to verify it.

Dogs have more than 18 muscles to control their ears. Doesn’t sound like a lot? Well, consider that humans only have six. No wonder they’re always scratching their ears – there’s a lot going on in that area.

You can probably guess that bites are the most common way for people to get hurt by dogs. Care to take a stab at the second-most popular way canines can injure us? It’s tripping over them.

According to the Centers for Disease Control and Prevention, more than 86,000 people in the U.S. go to the ER each year after falling over a pet, so make sure that when you’re heading over to the fridge for a drink you’re careful or else you’ll find yourself heading to the hospital.

Three dogs – a pair of Pomeranians and one Pekingese — survived after the Titanic sunk. There were 12 altogether and, perhaps not coincidentally, the ones that lived were all in first class.

Dogs Are Beneficial To Human Health

Scientists have found that petting a dog can help your blood pressure and heart rate. Of course, we’re guessing that’s not true if you hate dogs or are terrified of them.

Some Snoutstanding Pieces of Info

A wet nose is as much a part of a dog’s makeup as peeing on a fire hydrant. But why exactly do they keep their schnozzes moist? It turns out it’s mucus that mongrels need to absorb smell. They then lick their honkers to test the chemicals they’re smelling. Wet noses also regulate body temperature.

There’s a reason pups do all the sniffing that they do. Their sense of smell is a minimum of 10,000 times stronger than humans’ and can be about 100,000 times as powerful.

If you’ve never gotten a dog because you don’t like the barking, may we suggest the basenji. It’s the only breed that can’t bark. It can yodel, however, so, yeah, maybe don’t get it.

When your dog goes to the bathroom, there’s a reason he’s going where he does. “Dogs use the Earth’s magnetic field when they’re relieving themselves. Not only that, but canines choose to do so in a north-south axis.” So, just remember that when your dog drops a deuce on that expensive Persian rug in your living room, instead of the much easier-to-clean laminate floor in your foyer.

Dogs sweat. Yeah, we’re not kidding. Whether they’re going for a run or stressing out about that job interview (just go with it, okay?), dogs actually do perspire, but you’ve probably never seen it. That’s because they sweat in the pads of their feet.

False Facts About Dogs You Always Thought Were True

Here’s something else we’re betting you didn’t know about dogs’ paws: they smell like…corn chips? Don’t worry – canines don’t bathe in eau de Fritos. It’s their natural body odor and comes courtesy of bacteria that exist on their paws.

Some Dogs Are Faster Than Your Car

There are a lot of dogs in the world. Like, a lot – about 900 million, to be exact. That’s a sharp increase from the 525 million in 2012, which means we should forget about the machines taking over. Focus on the dogs.

Duke is a Great Pyrenees that has the honor of being the only dog to be elected mayor of an American town. He’s held office in Cormorant, Minn. And he must’ve done a good job because he’s been elected three times. How bad must the losing candidates feel?

There’s some research to back up the long-held belief that dogs can help you attract mates. In one study, a man approached 240 women and asked them out. When he did it by himself, only 10% gave him their phone number. When he had a dog in tow, that number shot up to 30%.

Dogs Are As Smart As Your Toddler

Dogs know about 165 words and the record is more than 1,000. In general, dogs are about as smart as a two-year-old human. Just because they recognize words, though, doesn’t mean they can, you know, say them. Every once in awhile, you come across a dog that sounds like he’s saying a word (just look up “dog talking” on YouTube). The fact is dogs can’t talk for a basic reason: they don’t have a voice box or a larynx.

Don’t be afraid to pass the blame the next time you pass gas. Dogs fart, often for the reasons we cut the cheese – diet, food that doesn’t sit well in our tummies and illness. So, if you do fart, go ahead and just say the dog did it.

Dogs Can Get Jealous

Envy is an emotion that man’s best friend can experience. According to CNN, “A study by scholars at the University of California, San Diego found that dogs showed jealous behaviors when their owners displayed affection toward an animatronic stuffed dog that barked, whined and wagged its tail. The dogs snapped at and pushed against the stuffed dog and tried to get between it and the human.” Keep that in mind because they’ve got sharp teeth and you don’t need to get them mad and use ‘em.